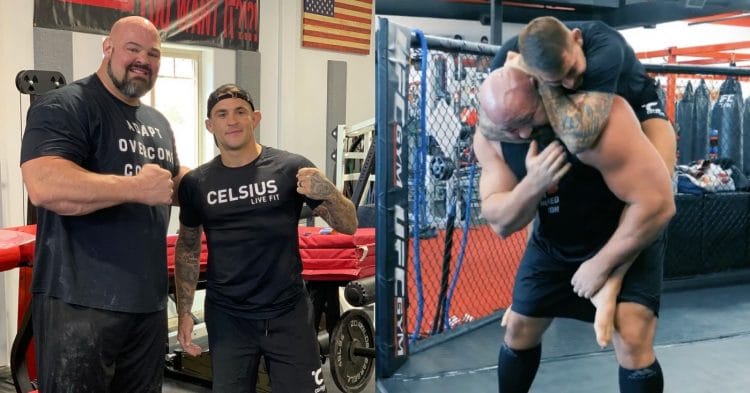 A few clips have been floating around the internet of Brian Shaw getting tapped by Dustin Poirier, and vice versa. Now we get to see the full training session, which shows these two elite athletes getting some work in the gym.

As arguably the greatest strongman of all time, Shaw is a physical beast of a man. Standing 6’9, and walking around close to the 400lb range, he is a towering figure of athleticism and strength.

Juxtaposed to this is Poirier, who currently sits at the number one ranked spot in the UFC’s lightweight division, after scoring a TKO win over superstar Conor McGregor in January. He is about 5’9, and while he competes at 155lb, he likely walks around at about 190lb in between fights.

That is why it was quite interesting to see Brian Shaw and Dustin Poirier training together, especially when it came to grappling. That was the subject of a recent video to Brian’s YouTube, that saw the UFC star show him the ropes with both striking and Brazilian Jiu-Jitsu.

The video starts with the men joking about how Brian was barely able to get boxing gloves on, before Dustin shows him a basic combination of jab, straight, lead hook. He explains to the strongman how this combination is a fundamental one, but utilizes momentum and torque to generate power.

“Here’s the thing, I just saw this dude light up walking in here, and he’s just like ‘It’s go time, we’re going to do this, and I’m just going 50% but moving quick. I like it. It’s fun to see that fire coming out.”

From there, Brian Shaw asks to see the power that Dustin Poirier has in his leg kicks, which were a key part to his victory over McGregor. So they grab a pad and have Brian hold it, so Dustin can whip his shin into it.

Things get interesting when they trade places though, as Dustin allows Brian to throw some leg kicks of his own. The sheer power that the strongman posses sends Dustin stumbling back, even with the padding taking the brunt of the force.

Next came the moment everyone has been waiting for: Shaw and Poirier hit the mats. The first aspect of this training saw Dustin on top in side control, trying to hold Brian down, but as they scramble he is able to get the back of the strongman, and even make him tap to a choke.

However, what goes around comes around and like the gentleman he is, Dustin lets Brian get the same position on him. However the sheer size of the WSM champ was too much for the lightweight, and after rolling over and giving his back, Dustin tapped before Brian even got the choke.

“Just the bodyweight is too much,” Poirier said before tapping. “My lungs couldn’t keep up.”

The video concludes after Poirier teaches Shaw some submissions that he can use from that side control position. Dustin shows Brian the arm triangle, and teaches what he does when his opponents try defending against the armbar.

It was surreal to see the size difference between Dustin Poirier and Brian Shaw, and the ways that it did or did not make a difference on the mats. This was a cool collaboration, and it will be great to see what else they do together.