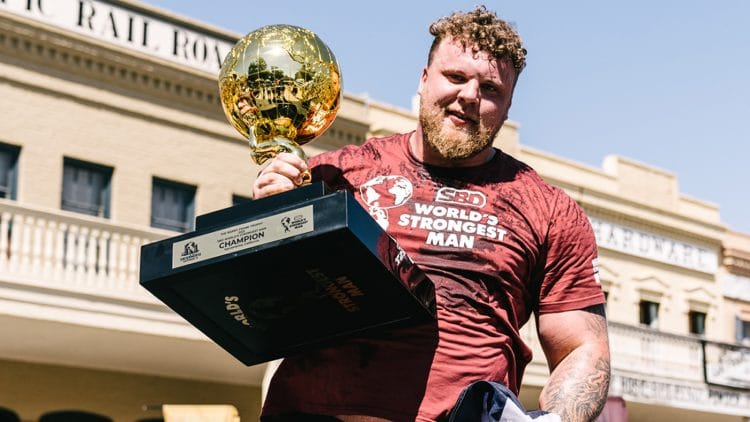 The competition certainly delivered too, save for a few athlete withdrawals throughout the week, with Graham Hicks, Luke Richardson, Terry Hollands, Chris van der Linde, and Bobby Thompson leaving before things ended. We even got to see Brian Shaw break his own Keg Toss world record, during the first day of the Finals.

After five days of events, and six days total, in the blistering heat that was in the triple digits, only one man could stand victorious. Finally, on Sunday it was determined that Tom Stoltman was the strongest man in the world.

Just because Tom Stoltman walked away as the 2021 WSM champ, does not mean it was an easy run for him to get there. In fact, this would end up being one of the most exciting WSM contests in recent memory.

Tom competed in Group Two during the Qualifying rounds, before going on to the Finals following his win during the Atlas Stone-Off. Then, after two days of events, he emerged victorious about the competition.

We couldn't write a better competition if we tried 😳 @Knaack_Storage pic.twitter.com/WEVCTVExR7

After the first day of the Finals, Stoltman had a huge lead over the competition, being 7 points ahead of Brian Shaw. Brian would regain some ground in day two, but ultimately fell short.

This makes Tom the first Scottish athlete to win the World’s Strongest Man. To do so, he beat four-time WSM champ Brian Shaw by 3 points, and Canada’s Maxime Boudreault by 9 points.

Things started off well for Tom Stoltman, but got complicated as the Qualifying Rounds of the 2021 World’s Strongest Man. He narrowly missed the top spot in his Group, and had to face off against Mark Felix in an Atlas Stone-Off to get a spot in the Finals.

Once there, Tom ran the show during the first day of Finals. He won the first two events, breaking ahead of the pack in a big way, and ending Day Four of competition with a strong lead, despite Brian Shaw’s record-setting Keg Toss performance.

Things got a little more hairy in the second day of the Finals, with Stoltman coming in ninth place during the Log Lift, and third in the KNAACK deadlift. However he put a bow on an incredible performance by winning his third Finals event, besting the rest in the Atlas Stone medley.

Note: Official scores are still being updated and the following will not be confirmed until the WSM Facebook Live show

Stay tuned to Fitness Volt for more coverage of the 2021 World’s Strongest Man, as the rest of the contest unfolds.