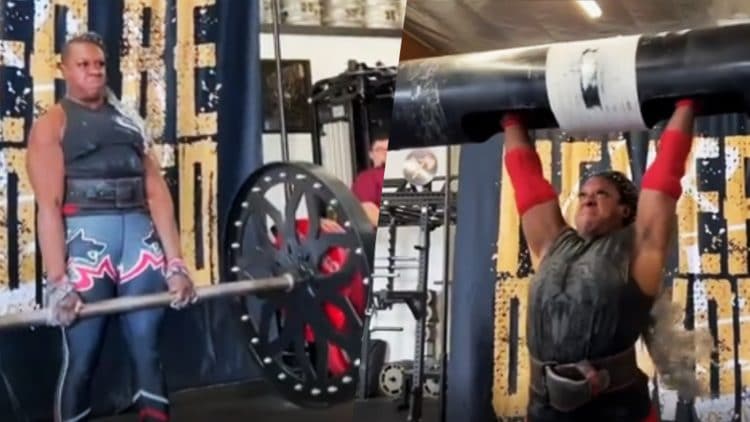 ‘They say shoot for the moon and if you miss, you’ll land amongst the stars. I didn’t get my moon today but man these stars are pretty!! Think these are both the highest recorded log press and axle deadlift in a competition so far!-correct me if I’m wrong- now THAT’S exciting!

Strongman Gabriel Pena also created the axle deadlift world record of 500kg at the 2021 Static Monsters Worldwide Competition. While not a lot of strongmen have claimed a 500-kg partial deadlift record, Pena became the first strongman to deadlift 500kg with an axle bar, which makes it all the more special. Pena completed the deadlift with a 16.75-inch axle bar wearing knee wraps, lifting belt, and wrist wraps.

With her October 23rd achievement, Nadia Stowers now holds the distinction for both heaviest and second heaviest log press. Stowers had successfully locked out 117.9kg (260lbs) overhead at the 2021 Clash on the Coast competition. Before that, the log press record belonged o Rebecca Cumpsty. She executed a 115kg (253lbs) log press at the SFN Expo in September 2019. Nadia Stowers competes in the 82kg weight class and the 130kg lift was nearly 1.5 times her competition body weight and nearly 13kg heavier than her previous record-breaking log press.

Nadia Stowers has an impressive resume in her own right. Stowers finished eighth at the 2021 World’s Ultimate Strongwoman contest that took place on September 17, 2021, in Dubai, UAE. At the 2020 SMWW contest, Stowers claimed the first spot with a 408.5kg (900.6lbs) total.

Stowers also created the block press world record of 97.5kg (215lbs) at the 2021 Clash on the Coast competition and she won the max deadlift event at the 2020 Strongman Corporation Nationals with 250kg (553lbs) deadlift competing in the 82kg (180lbs) weight class.

The Best Pec Deck Alternatives for an Awesome Chest