Numerous world records were shattered during the 2021 Clash on the Coast, from both strongmen and strongwomen 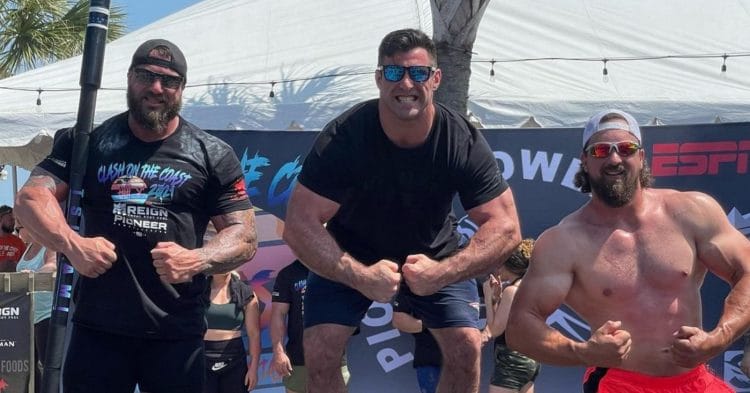 The world of strongman had an exciting weekend of action, with the 2021 Clash on the Coast. This is a recap of the competition, including the numerous world records broken throughout the weekend.

The Clash on the Coast took place from April 30th-May 2nd, in Hilton Head Island, South Carolina. The best middleweight strongmen gathered to compete in the under 105kg division to see who would come out on top.

And show up they did, as there were four athletes who walked away from this contest with a new record. It was a wild weekend of action, and we have it all recapped below, just in case you missed it.

Clash on the Coast Final Standings and Competition Recap

While there were middleweight strongwoman competitors and Open strongman athletes attended the event to attempt world records, it was just U105kg strongmen who competed at the 2021 Clash on the Coast. With Martins Licis and Nick Best as head judges, and Anthony Fuhrman organizing the event, the following three athletes ended the weekend on the podium:

Clash on the Coast Final Standings

Throughout the course of the competition, each day consisted of athletes completing different events in heats, so that the action continued in a constant manner. Each day also featured a video recap, captured and uploaded to Martins Licis’s YouTube channel.

In addition to the daily competition, there were several world record attempts during each day of the 2021 Clash on the Coast. We already discussed the new American record log lift accomplished by Bobby Thompson on day one of the competition, but he was not the only one with big performances.

Day Two of the competition saw a middleweight strongwomen log press record attempt in the form of a battle between Melissa Peacock and Nadia Stowers. Both ladies were able to match the record at the time, but it was Stowers who successful at surpassing the world record with a 260lb press.

The final day of the Clash on the Coast saw a multitude of records achieved. During the Max Axle Press event, Nicolas Cambid pressed a mind blowing 417lb to land a new middleweight world record, before going on to win the whole competition.

In addition to that, Nadia Stowers was back again with another world record attempt, this time with the block press. After locking down 215lb, she scored her second middleweight world record of the weekend.

And last, but certainly not least, we saw Melissa Peacock also returned with a second world record attempt at the Clash on the Coast, and this time she was successful. By landing a 275lb axle press, she not only pulled off a new women’s middleweight ATWR, but captured a Canadian record as well.

Congratulations to all the athletes who walked away with world records or a podium finish at the 2021 Clash of the Coast. A lot of attention is paid to the big athletes in strongman and strongwoman competition, so it was great to see such impressive work from the U105kg division.