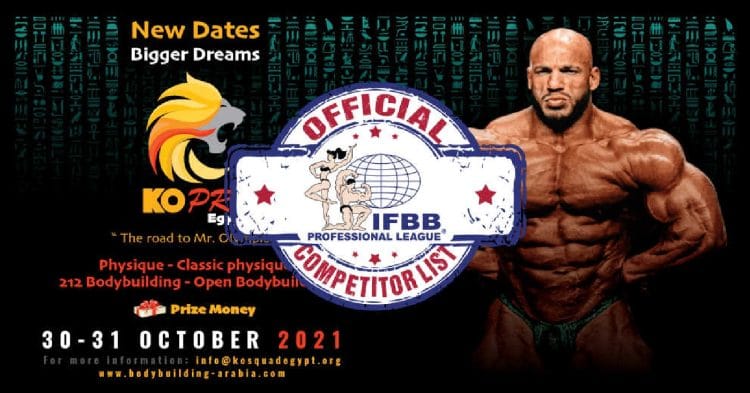 The world of bodybuilding continues with the 2021 KO Pro Egypt, set to go down on Halloween, October 31st. Ahead of this contest, the competitor list has been revealed, featuring some big names.

The KO Pro Egypt takes place after the country’s biggest star, Big Ramy, defended his Olympia title and brought home his second straight Sandow. While there are some in the country who look down on the sport of bodybuilding, you need only to look at the massive show of support that Ramy got when coming home, to realize just how big the sport is in this region.

Now the country will be playing host to an event of its own, with invitations to the 2022 Olympia on the line for the winners. This is going to be a male dominated event, with four men’s divisions making up the roster; Men’s Open, 212, Classic Physique, and Men’s Physique.

The main draw at the 2021 KO Pro Egypt show is, of course, in the Open Division, where there are actually a lot of the same names that competed in last weekend’s Legion Sports Fest. The competitor list revealed that Regan Grimes continues to stay busy, as he appears here after coming in second place behind Shaun Clarida at that contest.

Also on the roster is Cedric McMillan, who started the contest last weekend, but did not finish after failing to make the first callout at the Legion Sports Fest. There has been no word as to why he withdrew, but the speculation is that he was disappointed he did not make the first callout, so it is interesting to see him in this lineup.

These are just two of the many interesting names to compete at the 2021 KO Pro Egypt. Here is a breakdown of the entire competitor list for this show.

The 2021 KO Pro Egypt is shaping up to be an exciting contest. Stay tuned to Fitness Volt for results and coverage of the 2022 Mr. Olympia qualifier.