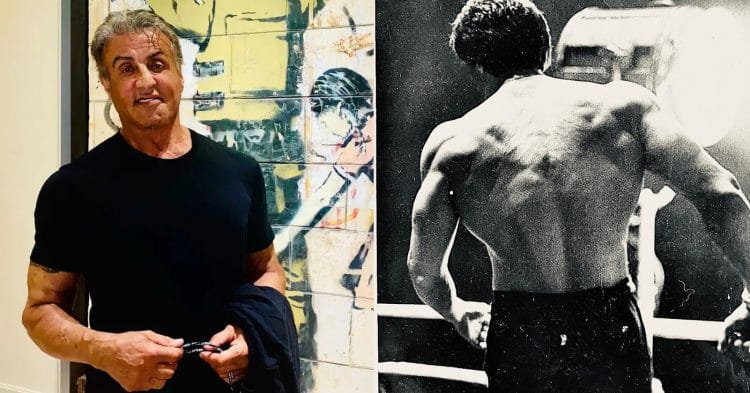 Over the years, Sylvester Stallone has built a reputation for being one of the most ripped men in Hollywood history. He recently did a throwback where he showed off his leanest physique ever, and it is still impressive to see.

In his prime, Stallone used to have a bit of a rivalry with Arnold Schwarzenegger. That is because the pair were the biggest action stars in the world, so they would try to one-up each other both on and off screen.

Part of what made Sly so popular and well known, was the massive physique that he had. He looked super shredded while blasting people with machine guns as Rambo, and even showed off his epic biceps as an arm wrestler in Over The Top.

However the role first put Sylvester Stallone on the map and his most iconic film of all time, also happens to be where he was at his leanest. He reflected on this recently, with a throwback post to his Instagram.

Sharing some photos from the set of Rocky III and in training, facing off against Mr. T’s character of Clubber Lang. In the description, Sly reveals that this was the leanest he has ever been, weighing in at a stunning 166lb, with less than three percent body fat.

“Funny flashback because I have nothing interesting to report today. This is prepping for the Mr. T fight. He was one strong dude. Trust me. This is also the lowest weight and body fat I ever was. 166 pounds and 2.8% body fat. That was tough.

It is crazy to think that there was ever a time where Stallone could be that lean, especially when compared to how he looks even nowadays. There must have been a moment in time, where he decided that the way to go was to bulk up and get absolutely shredded.

The more recent roles that Sly have largely been in the Expendables franchise, where it is important for him to be as jacked as possible. This has led to a stark contrast between the way he looks at 74 years old, versus his lean frame from 20 years earlier.

Whether he is leaned out or bulked up, it is hard to deny that Sylvester Stallone is an ultra athletic man, even at this point in his life. As you could see with this throwback, he was a beast of a man then, and that still remains true to this very day.