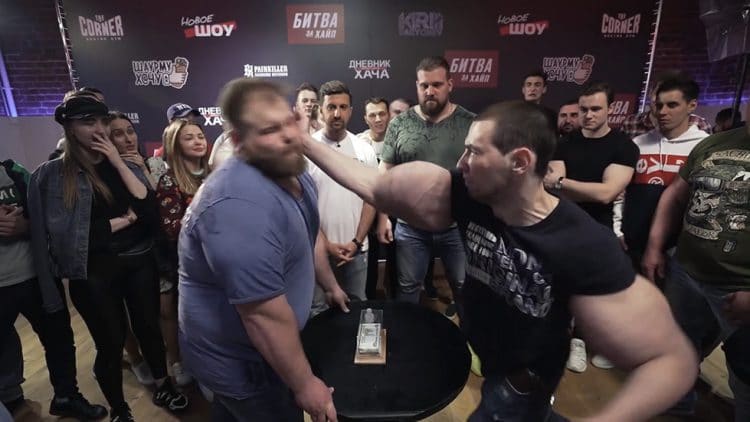 Well…can’t say that I’m not surprised. The ever-popular “Ruki Bazuki” Kirill Tereshin, competed in a popular Russian combat sport. I am, of course, talking about the Russian Slap championship.

Yes, the same championship Logan Paul was training for but pulled out after knocking a guy out. However, Ruki Bazuki was not of such luck.

Tereshin, fueled by his ego and self-belief that his arms are actually functionally big and not just giant puss bags, went to the most hardcore sport on the planet-the slap championship. The outcome was the same as you would expect it.

Kiril went up against the reigning and defending champion, “the Russian farmer” Vasilii Kamotskii, who looks like he eats slaps for breakfast. Kiril stares him dead in the eyes and slaps him with his best slap ever and unfortunately for him, Vasilli didn’t even flinch.

He regained his composer looked Kiril straight in the eyes and slapped the everloving life out of him, knocking the Synthol out of his arms.

Kiril stood up, tried to go for round 2 but just couldn’t regain his composer from the knockout. Again, I use this opportunity to crap on these Russian Synthol “X-Men”.

In the end, those giant arms got Kirilin nowhere and will never give him strength or raw power. They are literally just inflated and useless(muscle usage wise) levers attached to his body.

The fame he is experiencing right now will fade into obscurity and the inflated tissue will have to be surgically removed. There is no pot of gold at the end of the rainbow, there is no silver lining when it comes to shooting artificial oils into your biceps and triceps.

If you are still reading this and you are maybe considering shooting some cc’s of your mom’s cooking oil into your arms to get some fame-stop. Instead of that, do the following; (at your own risk)

1. google “steroids” and educate your self on the best and worst roids available and their prices.

2. Once you found the lucky winner, save up enough money so you can buy yourself a stash big enough to get you the body fitness magazine covers are made off.

3. Find the cheapest gym you can find, the crappier looking the better.

4. Create an Instagram account, get sponsored by “Bang energy” and sell your own workout plans while claiming you are natural.

What You Should Know When Transitioning From Powerlifting To Bodybuilding