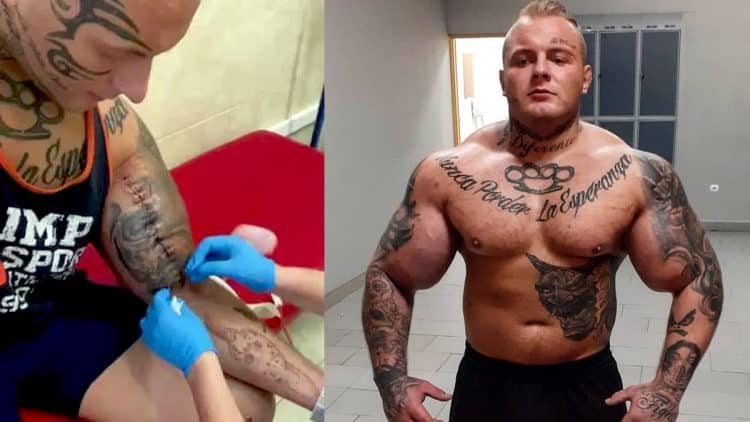 A bodybuilder/MMA fighter named Szymon Komandos is paying the price after continually shooting site-enhancement oils like Synthol into his biceps. In posts made via Instagram, Komandos mentioned that he was rushed to the hospital to remove excess tissue in an emergency surgery.

Site-enhancement oils like Synthol are used to manage the aesthetics of certain body parts. They add volume to a specific area and look similar to an implant. While some have used it, the drug is not allowed in official bodybuilding contests and many high-level athletes look down on the practice. Overuse of Synthol and site-enhancement oils can lead to serious health problems.

While details surrounding the surgery are limited, there were no life-threatening complications during Komandos’ operation. In the past, Komandos, who dons a Mike Tyson-esque face tattoo, has also been open about other drugs/steroids he uses.

“This is my current cycle. There’s a lot of it, so I can’t remember everything,” Komandos shared.

Check out his post-surgery video below; viewer discretion is advised.

Related: Do Site Injections Like Synthol Have a Place in Competitive Bodybuilding?

Komandos revealed in his post that more surgeries like this one are likely on the horizon. He added that the procedure was ‘difficult’ but he’s not giving up.

“I’m probably still going to have a few surgeries, so I’m going through a tough road now but I’m not giving up, I have the best Doctor Mr. @chirurgjacek who is a perfectionist with a lot of experience, as the only person who gave me a helping hand to to help me with this difficult procedure even though I have gone around various surgeons and no one even wanted to look at it.. they just wasn’t cut out for it.. Greetings to Mr. Jacek and I wish you all the best.

And what about my part: soon you will see the first posts on YouTube, greetings to everyone who is keeping their fingers crossed for me, I promise you that I will fight and show you what I can do despite what I have been through and I’m still fighting, keep my head up no matter what yło, now hopefully the hands will be o much more efficient that I will plus, everyone who knows me knows how it will be, greetings to the real ones and to my brothers behind the bars of the VAT” Komandos wrote.

In a separate post, he showed video of the tissue removed from his arm.

Despite the operation, the ‘Polish King of Synthol’ made it clear this surgery won’t affect his odds of returning to mixed martial arts.

“Don’t even consider that I’m going soft or losing hope.”

Outside of bodybuilding, there are plenty of people who misuse the drug. Most notably, ‘The Synthol Kid,’ real name Kirill Tereshin. In addition to artificially enhancing his biceps, ‘Russian Popeye’ also shot Synthol into his face. In June, he went viral after receiving ‘alien face’ injections in his cheekbones to make his appearance more ‘extraterrestrial.’ Thus far, Tereshin has been through two surgeries to correct his arms.

The topic of site-enhancement oils often rears its head in bodybuilding discussions. IFBB veteran Chris Cormier has talked candidly about using Synthol. In Sept., ‘The Real Deal’ said he shot site-enhancements into his calves. He implored anyone watching to steer clear of drugs like Synthol because they damage and kill muscle tissue.

Previously, Cormier warned Hadi Choopan of Synthol use as well. This came after ‘The Persian Wolf’s’ former managers accused him of using the drug. In spite of the accusations, Choopan has arrived in the U.S. and will finalize preparations for another Mr. Olympia contest. Before taking to the stage, Cormier suggested that Choopan bring a ‘completely different’ look to his shoulders.

Cormier isn’t the only bodybuilding veteran that was negatively affected by site enhancement oils. After using Synthol in his biceps, bodybuilding coach Milos Sarcev said it was the single biggest regret of his career. He used it a number of times and mentioned that his biceps never looked the same after.

Fortunately, Komandos suffered no adverse complications as a result of the bicep draining surgery. He hopes to return to MMA in due time after he’s done healing.