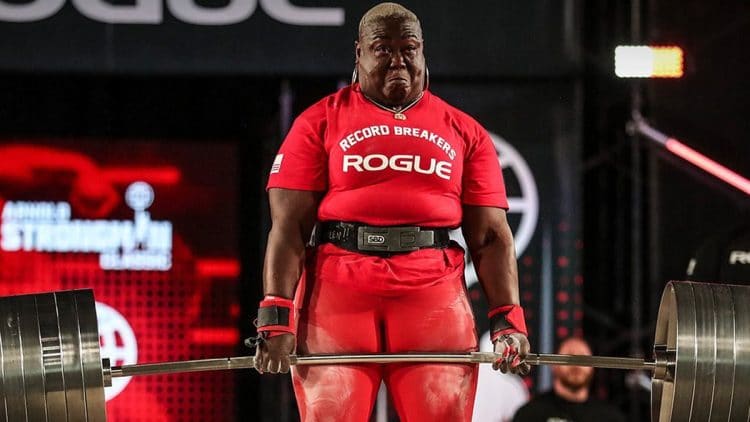 The 2022 Rogue Record Breakers strongman event, took place on March 5-6, at Arnold Sports Festival 2022, in Columbus, Ohio. Rogue set $5,000 for anyone who can beat the previous record, and that resulted in Tamara Walcott’s exciting crossover from powerlifting to strongman. Tamara is well known as the greatest deadlifter in the women’s division, and she set the new Elephant Bar Deadlift World Record of 641 lbs (291 kg).

This deadlift is the heaviest that Tamara has done in competition, but it wouldn’t count in powerlifting because of the barbell. Tamara only used a lifting belt, wrist wraps, and some shin protection to aid her in the lift. Taking into consideration that the bar was loaded with 641 lbs (291 kg) it is expected to see it bend a bit. However, the elephant bar is very flexible and is recognized for that. For that reason, Tamara had to pull out the slack, and then continue pulling as usual.

The previous elephant bar deadlift record was held by Andrea Thompson, having pulled 621 lbs (281.7 kg) at the 2020 Arnold Sports Festival. Andrea also attempted to defend her record at the 2022 edition, but could not keep up with Tamara Walcott.

Tamara Walcott has built an extremely successful career in powerlifting, despite starting her powerlifting journey just four years ago. Since then, she has taken part in 8 sanctioned competitions, and won seven of them. Tamara also competes in the +90 kg weight class. Furthermore, Tamara has claimed and currently holds the title for the women’s All-Time heaviest raw deadlift in the world.

Tamara won multiple competitions in her powerlifting career, but the 2021 WRPF Bucked Up Showdown featured her greatest performance, as the majority of her PRs are from there.

Tamara’s deadlift prowess is absolutely incredible, and it was noticed by many people. This ultimately got her featured on the Ellen DeGeneres’ show. She also recently posted a 295 kg (650 lbs) deadlift PR from training, and you can watch it here:

Tamara’s elephant bar deadlift world record is extremely impressive, and it definitely got her exposed to a new type of audience. This event was introduced to Strongwoman in 2020, but after Tamara’s performance, the record could stay intact for a while.