This is Tamara Walcott's second Unofficial World Record this week. 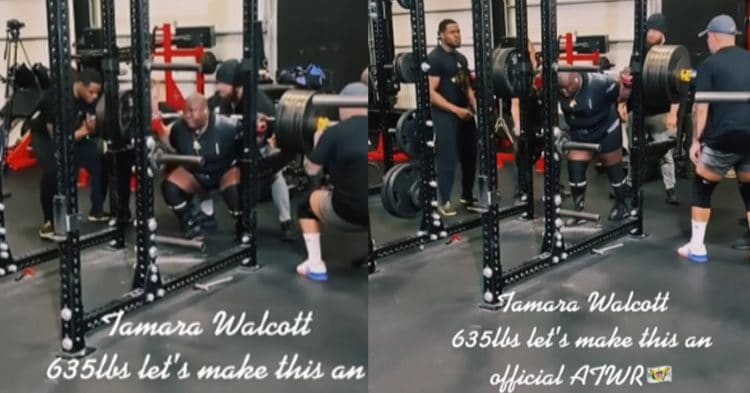 Tamara Walcott’s last week of prep for the Ghost Clash is going extremely well, as she is beating World Records with ease. The Ghost Clash will happen on February 12-13, 2022. Tamara’s latest outing in the gym continued the trend, as she unofficially broke the current Squat World Record by 9.1 kg (20 lbs). Tamara is known for her deadlift prowess, but it is evident that her squats are not lacking at all.

In her most recent Instagram post, Tamara displayed a record-breaking squat of 288 kg (635 lbs), which was done with insane speed. At no point in the lift did it look like Tamara was struggling, which distracts from the fact that no woman has squatted more weight in the raw division. She used a lifting belt, knee sleeves and wrists wraps to aid her in the lift.

Tamara competes in the +90 kg category, and the current official squat world record is held by a powerlifting icon, April Mathis. She set the record of 278.9 kg (614.9 lbs) at the 2011 APF Southern States.

In just three days, Tamara will compete and get the chance to make these World Records Official. Tamara will certainly aim to break the Deadlift and Squat World Records, and if that is successful, she will most likely also claim the Total World Record, assuming she doesn’t severely fail in the bench press.

Tamara already holds the All-Time World Record Deadlift, but she destroyed it a few days ago in training. Tamara deadlifted 295 kg (650 lbs) completely raw. At this competition, she could become the first woman to deadlift 300 kg (661.4 lbs).

You can watch the 295 kg deadlift from training here:

Tamara Walcott is relatively a newcomer to the sport of powerlifting, as her first sanctioned powerlifting competition was the 2018 USAPL Rumble on Pratt Street. She has so far competed in seven sanctioned competitions, winning six of them. Her most famous victory was in the WRPF Bucked Up Showdown in 2021. In the competition, Tamara set all of her current official personal bests.

As things stand currently, Tamara Walcott could become the official strongest woman in powerlifting on the upcoming Sunday. In addition, the sheer power and speed on the latest squat is frightening. Judging by that, it is not hard to imagine seeing Tamara lift 300 kg (661.4 lbs) on both the squat and deadlift at some point.