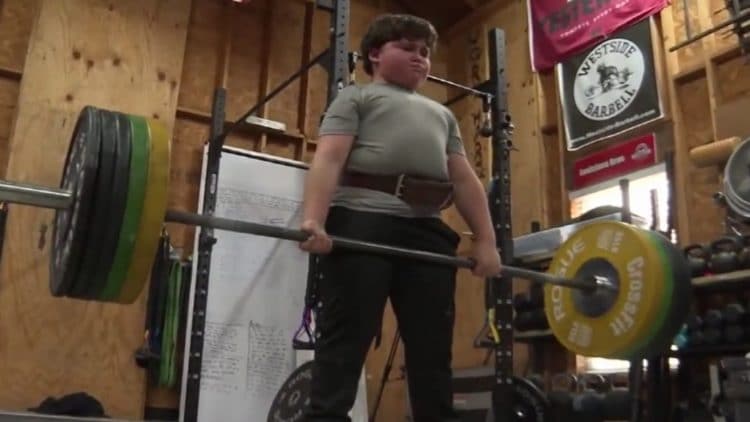 Tate Fegley is not your average 9-year-old boy. In fact, he has some serious weightlifting ability, already breaking several records.

On the outside, Fegley seems like a typical third-grade student. However, when he steps into the weight room, he becomes a completely different animal. After just 18 months of training, at the age of 9 years old, he can already lift some insane weight.

Tate Fegley has already done some serious things in the weightlifting world. Currently, he is able to bench press 92lb, squat 190lb and deadlift an insane 230lb. As a result, he has been able to capture seven world records for his weight. Moreover, he has even set three of them in one day before! He is simply a weightlifting prodigy.

Speaking with a local news station, Tate Fegley explained what motivated him to start weightlifting.

“I just loved watching them work out and lifting the weights,” Fegley said.

Not only that, but Tate’s trainer Peyton Gray had some high praise about his work ethic.

“He works ridiculously hard. and it’s very motivating to see,” he said about Fegley. “And I think that’s 99 percent of his progress, is how hard this young man works.”

Tate has even gotten support from his parents. His father, Brint Fegley, even explained that this was never about the records. He just enjoyed lifting the weight.

“It was never about can we break records,” he said. “He started the process. He got better and all we did was encourage him.”

Check out this news report showing his incredible strength:

Tate Fegley is expected to compete for a national championship, later this year, in Florida. It will be exciting to monitor the progress of this amazing young athlete. With work like this, a spot on the Olympic team could very well be in his future.