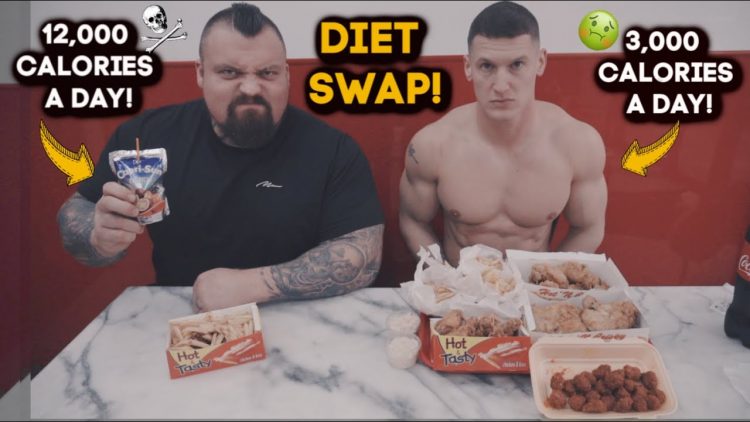 Matt from “Mattdoesfitness” is an English YouTuber that does fitness shenanigans and Eddie Hall is well…Eddie Hall. The Beast, the 500kg deadlift record holder, 5 times Britain’s Strongest Man, 6 times UK’s Strongest Man and 1 time World’s Strongest Man. You could say that he is a fairly strong individual.

In a social experiment-Esque youtube video, Eddie and Matt met up for a Strongman training session and to swap their average caloric intake for a day, with a fun twist- they pick each other’s meals. Comparing their regular diets to their temporary diets, Eddie will be massively undereating and Matt will be horribly overeating.

Matt:  3 slices of bacon, 3 sausages, 2 eggs, beans, tomatoes, black pudding, a toast, and some hash browns. To help him digest all this food he gets Eddie’s beverage of choice for him; hot chocolate and 2 glasses of juice.

Eddie:  A single, comically small, cheeseburger and four slices of jam spread on toast. Matt’s beverage of choice for Eddie; a latte(with no sugar).

After undereating and overeating their breakfasts they do some Strongman. Even though I’m new to Matt and his “Mattdoesfitness” channel, you can visually see that he is a tall and muscular dude more than likely capable of lifting some respectable if not impressive weights. However, even a strong young man such as Matt is no match when exposed to a gauntlet of Strongman implements and exercises. He looked how regular, none-fitness enthusiasts, look when exposed to lifting weights for the first time. Eddie, on the other hand…well, he was fish in water when moving the weights. It was almost as if he won a contest or two based on strength at some point in his time.

Eddie explains to Matt that, all Strongman snacks during their training sessions.  Seeing as for the day Matt is eating and training as a Strongman, Eddie orders him takeout. The takeout consisted of; a ham and cheese toast sandwich, much to the horror of Matt who has barely begun digesting his hefty breakfast.  Eddie, on the other hand as a fully functional bodybuilder for the day, gets to drink tap water.

The next meal comes after a calorie-burning Strongman workout so naturally, they have to make up for the lost calories. Matt, by the power of Eddie Hall’s vile sense of humor, gets;  a “family mega bucket” of fried chicken with fries and coleslaw and 2x 2L bottles of coca-cola. Eddie, by the power of the vengeful Matt, gets a normal-sized portion of extra spicy chicken wings with extra hot sauce topping on it. Unbeknownst to Matt, Eddie has enjoys spicy food, so the revenge backfires as Eddie Hall, enjoys his hot sauce chicken wings.

Eddie, of course, finishes his chicken wings drowned in enough hot sauce to give Satan himself heartburn. While Matt barely finishes a quarter of his portion before Eddie has mercy on his stomach and lets him slide.

Now, what lunch would be complete without a good dessert? Eddie says that as a dessert he usually eats half a family-sized cheesecake, but since he’s not an absolute sadist, he merely orders three slices for Matt, accompanied by three scoops of ice cream and another hot chocolate.  Matt has another trick up his sleeve and orders  Eddie a birthday party-sized sundae as revenge, coupled with a double espresso, after learning earlier that Eddie is very sensitive to caffeine.

If you followed Eddie Hall even the slightest through his channel or through Brian Shaw’s channel, you’d know by know that he is a tricker extraordinaire and a prankster of massive proportions. No, that was not a fat joke.  Matt, on the other hand just wants Eddie to feel the suffering he’s stomach has been enduring the entire day so by this moment they are both locked and loaded with their “prank” meals. The “prank” meals are extra spicy pizzas, with Matt eating two and Eddie settling for one.