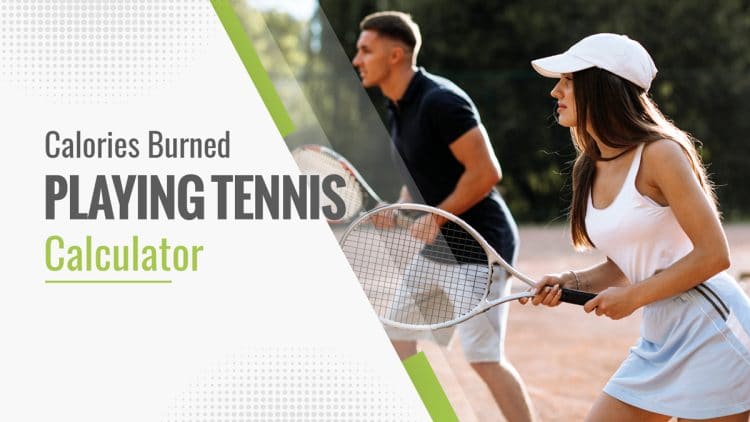 The number of calories that you burn while playing tennis will depend on a number of factors, including your height, weight, style, and level of play that you are participating in. For example, if you are just working on “volleys” and hitting the ball back and forth, you will be burning fewer calories than if you were playing a singles match of high-intensity tennis.

How to Use The Calculator

Using the calculator is simple. To calculate how many calories you are burning from playing tennis, just input your weight and the time that you’ve spent or plan to be playing tennis for. Then simply select the specific activity that you plan to perform and then hit “CALCULATE”.

You will now see the approximate calories burned boxing.

How The Calculator Works

Our tennis calculator uses MET (metabolic equivalent of task) values in order to find out the number of calories that playing tennis will burn for you. This value is determined by a convention of 3.5 mL of oxygen per kilogram of each minute while doing the specific activity [1].

The calculator has preset levels of exercise and corresponding intensity that playing tennis gives you. Using this calculator will give you a realistic idea of how many calories you will burn.

Using MET to determine your body’s energy expenditure is what our calculator is primarily used for. A MET value is the number that determines the energy it takes to perform various activities, such as playing tennis. This is the ratio that shows the relationship between your active metabolic rate to the resting metabolic rate.

The formula that our tennis calculator uses to determine the number of calories burned per minute is (MET  x  bodyweight in Kg  x  3.5) ÷ 200.

An individual weighing 175 pounds will burn approximately 418 calories from hitting tennis balls in non-gameplay with moderate effort. This activity has a MET of 5, which means that it burns 5 times as many calories as your RMR.

This is what the formula for calculating the calories burned while playing tennis with moderate effort will look like:

Tennis is one of the most played sports in the entire world, with professional athletes representing their countries during the Summer Olympic Games, held every 4 years. Tennis can also be played at all skill levels and at any age.

The objective of tennis is to hit the yellow tennis ball with your racket in a direction to make it so the opponent cannot return the ball with a legal hit. Competitive tennis matches involve a “serve” to start each point. The person who serves to start the game will alternate as the game progresses.

As we mentioned previously, tennis matches are played in “singles” or “doubles” formats. As you can guess, a singles match is played between two players head-to-head, while a doubles match is played between two teams of two players each. Singles and doubles have many differences which can influence the style of play and strategy used to win the match.

The four Grand Slam events are:

The US Open is played in New York City each year, starting on the last Monday of August, and running for two weeks through Labor Day. The US Open’s origins trace back to 1881 and are one of the oldest tennis championships that exist today. In addition to the standard events, the US Open has events for seniors, juniors, and wheelchair players.

Women’s tennis also has a rich history of many notable players that are considered to be the best to ever play the game. The top women’s tennis players of all time include:

Unlike many other competitive sports, tennis doesn’t require an excessive amount of equipment to be able to play in competition and recreationally. In order to play the game of tennis, you only need a racket, tennis balls, and a court to play on.

Some other common accessories that are used while playing tennis include:

Tennis is a sport that people of any age, ability, and experience can play. In addition to the enjoyment that the sport of tennis provides, it’s also a great way to exercise and burn calories while having fun.

Tennis continues to be one of the most popular and widely viewed sports in the world, and the Grand Slam tournaments draw in crowds from all across the globe. The minimal amount of equipment that is needed to play the game of tennis makes it an attractive sport for people of all ages and skill levels.

Be sure to check out all of our other activity calculators at FitnessVolt.com!

Push-up Board — How To Use, Benefits, and Workouts