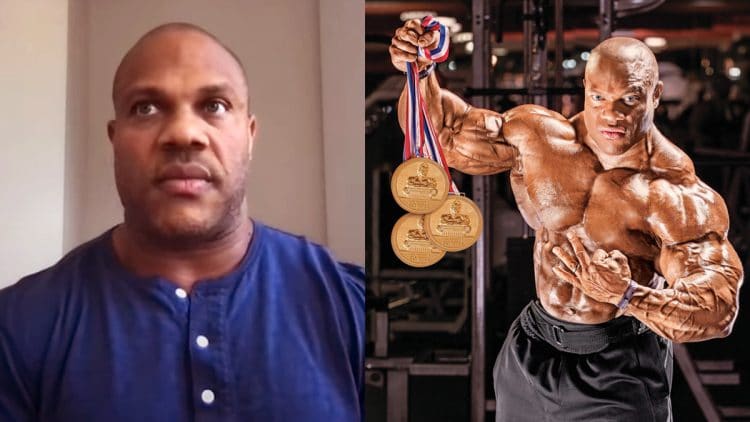 Bodybuilding legend and seven-time Mr. Olympia winner Phil Heath recently answered the question about his return to competitive bodybuilding. Heath is one of the greatest bodybuilders of all time and although he has not officially announced it, he remains retired from competition.

Heath last competed at 2020 Olympia en route to a third place finish in the Open Pro division. During a recent visit to The Lobliner Lowdown podcast, Heath answered the question of his competitive future in extreme detail and shared some lesser-known details that have prompted him to stay away from the competition so far.

When asked if he will return to competition, Phil Heath stated that more than ‘if’ he can make a comeback, ‘how’ can he make a comeback is the bigger question. Heath has lived with Hernia for the majority of his life and shared the complete history of this problem to explain the difficulties in his return. Phil Heath revealed that he was sent into a hernia surgery prematurely when he was around 3 years old.

“… because I did not have enough fascia in that area. So they sewed it up when I was too young. I wasn’t developed,” Phil Heath said.

Years of strenuous sports and bodybuilding routine eventually took a toll on the surgically repaired abdomen and things got worse three weeks before the 2018 Olympia.

“Three weeks out (from 2018 Olympia) I was cinching up on my belt and I’m like, “oh my gosh. I feel like something popped.”

“… So I run to the house and it’s like not bruised but discolored. I’m like – wait a minute! I can’t feel the belly button spine.”

“I called up Dr. Grishkin of Ohio and he’s just like, “Basically you have a floating belly button. You got to figure it out, you got to just deal with it.” That’s the information we can’t obviously have. When you compete people are like, “oh he’s distended”. And I am like you try holding something that just popped and it erupted like you have no feeling…” Heath added.

Phil Heath famously saw his seven-time Mr. Olympia winning streak end at the hands of late Shawn Rhoden that year. His distended belly and discomfort while trying to hold his abs in is one of the strongest visuals from the event. Heath stated that he had to undergo a surgery to cure the condition and said:

“Then I had to go right back into surgery which was a much more extensive procedure because now they have to take both left and right side, bring everything together and then the mesh and the staples…”

Phil Heath spent the next few weeks recovering from the surgery. He stated that the fear of having that happen again is the biggest hurdle in his return to competitive bodybuilding.

Heath did return to the stage at 2020 Olympia and finished third in the Open Pro division. Looking back at everything he went through before that, the third-place finish will probably have to be considered an epic result.

Weighing in the 250lbs range, Phil Heath is trying to figure out his base form while being on TRT.

“After having pneumonia and Covid, that dropped down my weight. I’m like… you know what? Maybe your body is telling you something. Maybe you just need to chill the hell out for a little bit. What rush do you have Phil to get back up there. There is no rush. Your body isn’t turning to crap. You can still train…” Phil Heath said.

The seven-time Mr. Olympia winner argued that even if he decided to come back, it will have to be an at least three year commitment to competitive bodybuilding depending upon how his comeback goes. Heath is reluctant to make that commitment as of now and said:

“… That’s really all the different scenarios. Sk if you think about it, it’s not like… If you’re gonna do it, it has to be a three-year commitment. And what will you be giving up during those three years with business, relationship, family, all those things… Excuse the pun but is the juice really worth that squeeze?”

Looking at his assessment, it seems unlikely that we will see Phil Heath on the bodybuilding stage anytime soon, at least for competition. However, he already has a great legacy and checked almost every box when it comes to competitive achievements.

Courtesy of Lobliner Lowdown YouTube channel, you can watch the full video here: