British strongman Terry Hollands withdraws from the 2021 World's Strongest Man with an undisclosed injury, announcing his retirement from WSM competition 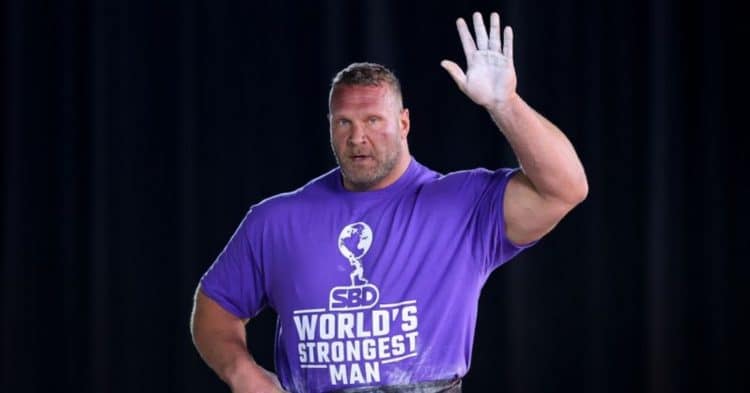 The 2021 World’s Strongest Man is kicking off it’s second day of competition, as it runs from June 15th-20th, in Sacramento, California. However after one day of competition, Terry Hollands has decided to withdraw from the contest, and announce his WSM retirement.

Hollands was looking to make an impact at this year’s WSM, and so far he had been doing just that. At the end of Day One, he was in second place with a second and third place finish in the first two events.

Unfortunately reports began to emerge that Terry had suffered an injury during the first event of the contest. These rumors became fact, when the Englishman posted to Instagram to reveal that not only was the injury was so severe that he decided to withdraw from the WSM, but he has also decided it was time to retire from this contest altogether.

“This year was always potentially my last year and I think it’s finally time for me to call time on my World’s Strongest Man career. I came here feeling pretty good and ready to go. Thought I’d give it one last shot and see what happens, and it wasn’t to be. I wasn’t to make the Finals,” Hollands said.

“I’m perhaps a little disappointed with how things went, but one thing I can take away from it is I’ve enjoyed my time here, I’ve enjoyed every year I’ve been at World’s Strongest Man, and I really appreciate everything the sport’s given me.

“I think it’s time now, as a 42 year old man, getting to the latter end of my career, to finally call it a day,” Hollands added. “That’s it. I went out on my shield, and I’m proud of everything I’ve achieved in World’s Strongest Man.”

That being said, Terry Hollands does not specifically say that he is retiring completely, only that he is calling it quits with the WSM. In fact, in the caption of the video, he adds that he is looking forward to seeing fans at a show sometime soon.

“I look forward to the next chapter and hopefully see you all at some shows in the future,” he wrote. “More will follow.”

The news of Hollands withdrawing comes just a few short hours after it was revealed that Luke Richardson had also suffered an injury that would pull him from the WSM. This one came in the form of a bicep tear, leaving him no choice but to pull out.

In his time in the sport, Hollands competed in the WSM every year but two, from 2005-2021. While he did not ever win the contest, he had a pair of appearances on the podium, scoring third place in both 2007 and 2011.

This year, he started off the contest strong, with a second place score during the Loading Medley, and a third place during the Deadlift event. This had him closing out the first day of competition with 7 points, and in second place in Group Four.

It is unfortunate that Terry Hollands had to end his World’s Strongest Man career on an injury. Hopefully whatever is going on is not too serious, and he can get back to action in another contest sooner rather than later.