Peiman Maheripourehir continues to inch closer to the world record with a gigantic deadlift, wearing only socks and a belt, with straps 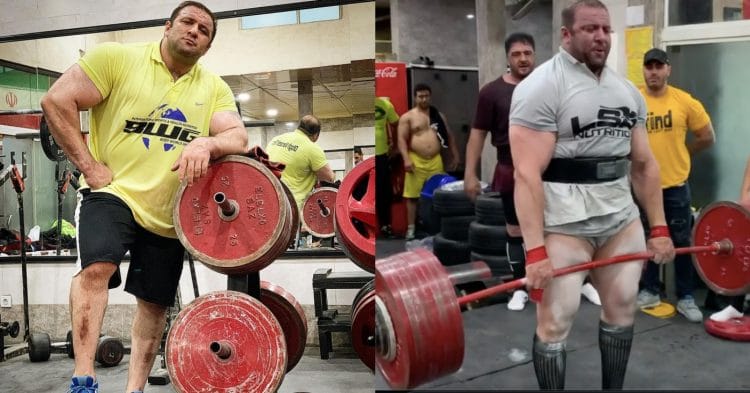 Iranian strongman Peiman Maheripourehir has made it clear that he is gunning for the deadlift world record. He took a massive step in the right direction in a recent training session, pulling massive weight.

We have seen a variety of incredible deadlift performances from Maheripourehir over the last few months. Most of them however, have come while he was fully equipped with a lifting suit.

That said, he decided to leave the suit behind for this most recent deadlift, which he posted to Instagram. This video sees him scoring an enormous 440kg (970lb) raw deadlift, after taking a few hard slaps to the face to get pumped up.

This was an impressive lift, to say the least. Peiman has been working hard to get closer to the world record, but in order to snatch it from the clutches of Hafthor Bjornsson, he would have to do it raw.

Since Thor pulled off the unthinkable and did a 501kg deadlift, we have seen a handful of other athletes attempt to break this record, but none have prevailed. That said, Peiman Maheripourehir seems to be putting his entire focus into this goal.

His journey towards this has been impressive to watch too, with him scoring some jaw-droopingly incredible numbers over the months. Of course, the craziest of these came from the 492kg pull that he did in March, which you can see below if you missed it.

As insane as this was, being the third heaviest deadlift ever recorded on film, Maheripourehir did this while wearing a lifting suit. So this more recent performance gives us a better impression of where he is, in relation to pulling off the world record.

It is clear that there is still a lot of work for Peiman to do before he reaches the world record, but he seems to have the best shot out of nearly anyone else competing. Although it is worth noting that Gabriel Peña plans to make his own attempt at the record this summer, so the goal could change for the Iranian.

Either way, it will be exciting to see Peiman Maheripourehir go for the world record, whenever he is able to make the attempt. No matter how that goes, there is no doubt that he is leaving no stone unturned in the process.