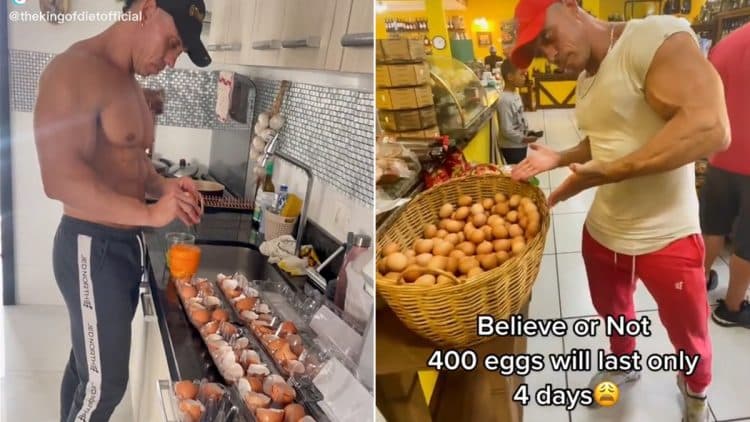 Eggs are considered to be one of the most nutritious foods one can eat. In a recent video posted on his TikTok, social media sensation Fernando Torraca, better known as The King of Diet, claimed he eats 100 eggs every day.

From the early days of bodybuilding, eggs have been a staple in every competitor’s diet. The wholesome food is so rich in nutrients that you can live off eating just eggs and still be healthy. Although they are high in cholesterol levels, it is the “good cholesterol” that they possess. Vince Gironda, popularly known as the “Iron Guru,” encouraged a diet of eating 36 eggs per day. He even claimed it was better to eat that many eggs over running a steroid cycle.

There has been a surge in fitness influencers following wild diets to attain fame. Weam Brieche had previously shared a video of him taking a bite out of the brain of a cow or calf and pounding it down with six uncooked eggs raw. Brieche likes the primal nature of the diet, much like Liver King, who promotes an ancestral way of living.

In a recent video uploaded on his TikTok, The King of Diet claimed that he consumes 100 eggs daily.

The clip has amassed about 115,000 views with 2,770 likes. Torraca’s meal prep appeared to be a challenging task. He separated the yolk from the eggs and only wanted the whites.

While he has shared numerous videos suggesting that he eats 100 eggs a day, he has never uploaded a video where he is eating all of them. His clips are generally accompanied by motivational speeches highlighting the dedication it takes to be a bodybuilder.

In another video posted on his YouTube account, The King of Diet revealed why he eats 100 eggs a day.

Despite allegedly consuming 100-or-so egg whites a day, Torraca claims he only consumes two egg yolks in his diet, as it is all the fat he needs. In the video, he discusses why he only eats eggs and not other protein-rich foods like dairy or poultry.

“I eat egg whites, no whole eggs…only the egg whites. If I eat the whole egg with all the yolks, I’m going to get deep diarrhea alright? I eat eggs because when I eat chicken I feel bloated, all right?

When I have gas, my belly looks like (I’m) 6 months pregnant. I don’t like it.” Because it’s too strong,” he said. “Instead, I eat some chicken, tuna, or any fish whatever.

“I don’t eat red meat everyday because I notice I get bloated. The next day, I’m so bloated. The eggs take me like a 30, 40 minutes, 1 hour to digest good, it’s gone. Fish takes me like three hours, three hours and a half to feel the good digest to move onto the next meal. The red meat takes me like 24 hours to feel good.”

Fernando Torraca had previously posted videos on his Instagram making the same claim. In one of those videos, The King of Diet was seen purchasing 400 eggs writing that they would last him only four days.

How to Eliminate Knee Pain from Lunges