An influencer on TikTok has attracted tons of attention after consuming his unconventional "high protein breakfast" when there is no time to cook. 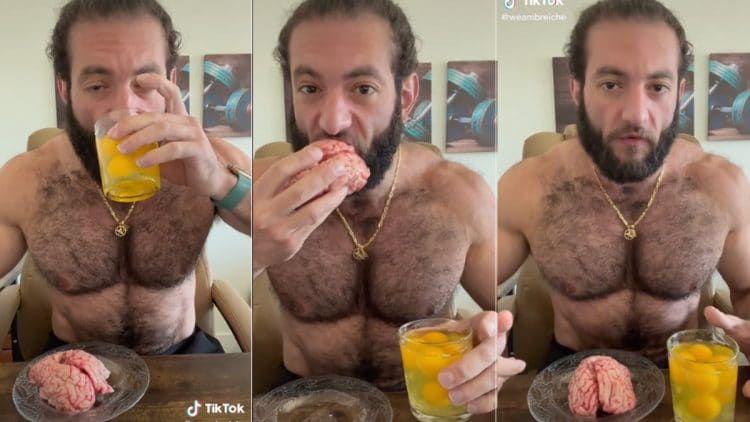 As part of his fitness routine, Weam Brieche shares TikTok videos often showing him eating raw meats similar to the type of diet that Instagram sensation “Liver King” endorses. Taking to TikTok, Brieche shared a video of him taking a chomp out of the brain of a cow or calf and then washing it down with a cup of raw eggs.

Brian Johnson AKA “Liver King” promotes an ‘ancestorial’ way of living and eating that he believes was introduced by our forefathers. Weam Brieche also appreciates the primal nature of raw meat diets as well as hunting for meals.

In the video, Weam explains to his viewers that he is teaching them how to eat a high-protein breakfast when there is no time to cook. He published the video on March 14, and it has accumulated over 10 million views with over 954,000 likes. After directing users to a discount code on his Instagram page, he revealed that his fans could buy ‘beef brain’ like the one in his video from a local free-range meat shop in New York.

With ‘ancestorial’ forms of eating becoming more common, the fitness influencer shared a video of him ingesting the cow brain while taking a swig of raw eggs and he eats it without hesitation.

Following the clip, commenters were shocked by Weam’s willingness to stomach the bizarre breakfast. One onlooker who garnered 10,000 likes said that raw eggs weren’t a big deal but called him “foul for eating a brain like it’s banana bread.” Another commenter expressed concern over the possibility of eating raw contaminated meat as they wrote, “enjoy the prions.” Prion disease is caused by eating raw contaminated meat which can lead to memory impairment, personality changes, and difficulty with movement.

Fitness influencers and celebrities have attracted attention in the past for their raw meat diets. Some have suggested that bodies absorb more nutrients when the meat is uncooked. However, most professionals insist that staying away from raw meats and animal organs is the best way to avoid foodborne illnesses. On Weam Brieche’s YouTube channel, he writes that he is not a doctor, and that “none of my videos should be taken as medical advice,”. The fitness influencer also added that “raw meat consumption could be dangerous if not well sourced”.

With millions of views and thousands of likes, raw meat diets are popular and controversial. Brieche appreciates the primal nature of the diet and proved it with his recent high protein breakfast.