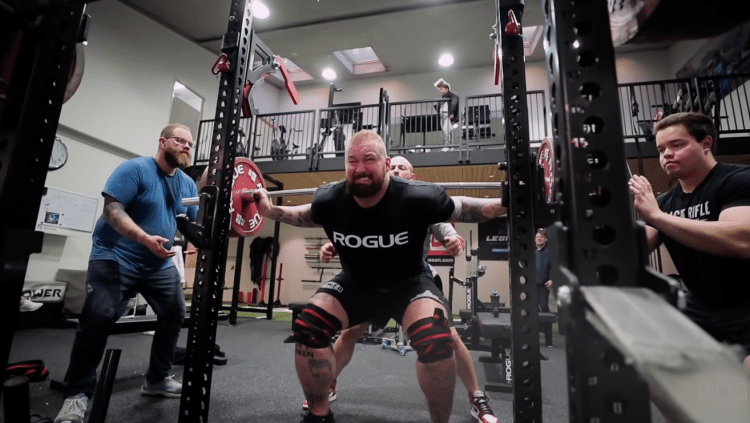 Thor Bjornsson is one of the most impressive strongmen in the world. Recently he showed off the leg workout that helps get him that way.

Bjornsson may be best known for his role as “The Mountain” on HBO’s Game of Thrones. Nevertheless, he is known in the fitness world for his accomplishments within the realm of strongmen competition. He won the 2018 World’s Strongest Man contest, as well as being the current Arnold Strongman Classic champ. Moreover, he has crushed the competition in his native Iceland, beating all challengers since 2011.

In order to achieve such heights, Bjornsson is constantly training hard. While he maintains an intense diet, to gain mass, he is sure to work it out when he hits the gym. This was most evident in a recent video, where he shows off his leg day workout.

In the video, Thor Bjornsson is working hard, with his coach Sebastian Oreb. Thor had taken some time off from training, so he was a bit slow to start. However, he began to loosen up as the training went on, and was able to have a better time.

A staple of leg day for anybody, Bjornsson and Oreb started with squats. However, these were no easy task, as the two decided to compete against each other. They started off adding 25kg plates to the barbell, before kicking it up to 150kg for three reps. Following that, the pair move to 200kg, for the same three reps, before concluding with an impressive 3 sets of 3 reps, with 275kg.

Following this intense start, Bjornsson and Oreb move on to the leg press. Subsequently, they hit 2 sets of 6 reps, using 100kg, 150kg, 200kg, and 250kg. Then, they would conclude the leg day with some harsh leg curls, that were almost too much for Thor to handle.

Leg day sucks for basically everybody. However Thor Bjornsson takes things to another level with this routine. He is clearly getting ready for the next round of competitions, and looks to perform very well.