Tia-Clair Toomey talks to her fans about how to use a resistance band, the number one piece of equipment she uses every day. 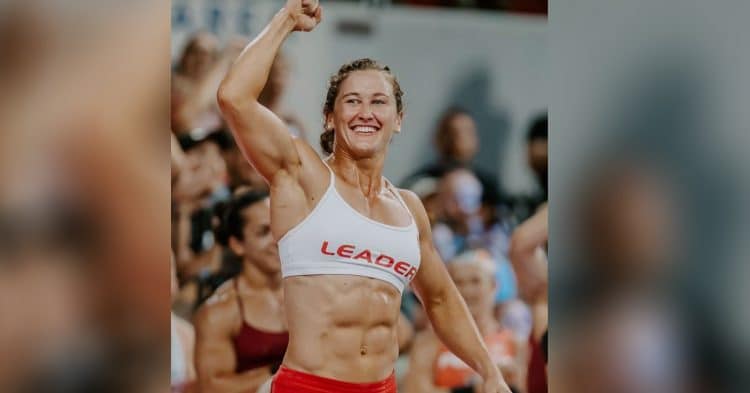 She has won the title “Fittest Woman on Earth” three times, and now Tia-Clair Toomey is going for number four. September 18 and 19 marked Stage 1 of the 2020 CrossFit Games where athletes from all over the world try to make the top 5 to make it to the second round of the Games where they will battle for the title.

Last weekend, Tia-Clair Toomey took home the W in Stage 1 of the Games, and she moves onto Stage 2 which will take place October 19-25 in California.

In Stage 1, she ran the leaderboard with 615 points, a healthy 35 points ahead of second placement Brooke Wells who came in with 580. Toomey ranked first in almost every event, including the 1 RM front squat with 313lbs, Damn Diane with a time of 2:28, Handstand Hold at 1:18, and Awful Annie at a time of 8:01.

In the Nasty Nancy, she came in third with a time of 18:26 but was only behind by 10 seconds to first place Katrin Tanja Davidsdottir’s time at 18:16.

In a video filmed just as Toomey was entering the taper phase before the 2020 CrossFit Games, she took a few minutes to demonstrate how she uses resistance bands in her workouts to improve glutes, abs, legs, and back. She describes the resistance band as the number one piece of equipment she uses every day and demonstrates how anybody can use it very easily as well.

“For me this is something that I apply in my training session every single day, even sometimes on my rest days. It usually depends on how I’m feeling. But I use this not only for maintenance, but also to activate my muscles throughout warmup and cool down. And I also use it as accessories when I’m trying to activate the tiny little muscles that often get taken over by our big major muscles.”

In the Monster Walk, the band is placed around the calves and just below the knees, and you walk sideways in tiny steps. She instructs that long steps are not the goal, but rather tiny steps sideways, and then forward and backwards is the goal to activate the glutes. She says it’s important to keep the hips under the shoulders so they are not sticking out when doing so and recommends 20 reps each way.

For Glute Bridges, she keeps the band in the same spot and lies down on her back, pressing her back against the floor. Then you are going to squeeze your glutes up keeping your feet on the floor and form a bridge with your back. She wants your knees and legs pushing out against the band. Do this for about 10-15 reps.

Then she brings the band up above her knees while still on the ground to begin single-leg glute bridges. Here you perform the same action but lift one leg at a time, alternating legs while your back is lifted to form the bridge.

She then takes leg lifts in a new direction but standing up. Keeping the band above the knees, hold onto a pole or a wall, and perform leg lifts behind the body until you meet resistance. Again this is going to work glutes and abductors.

She also uses the band for squats, focusing on pushing her knees against the band to keep her form tight.

As her coach and husband Shane Orr introduces her tapering workout, he says it’s been a “grueling season” and they are looking forward to the offseason for a little break.

Can Toomey take home the W again in Stage 2? We think she can. She’s a born winner.

She’s not just defending the “Fittest Woman on Earth” title, but she’s also an Olympian who knows how to dig deep in the heat of competition. In the 2018 Commonwealth Games, she also brought home the gold and placed 14 at the 2016 Summer Olympics. Those stats alone are enough to worry any opponent.

Stage 2 of the 2020 CrossFit Games will be streamed live from Aromas, California, on October 19.

Bulking vs. Cutting: The Best Methods To Accelerate Gains!