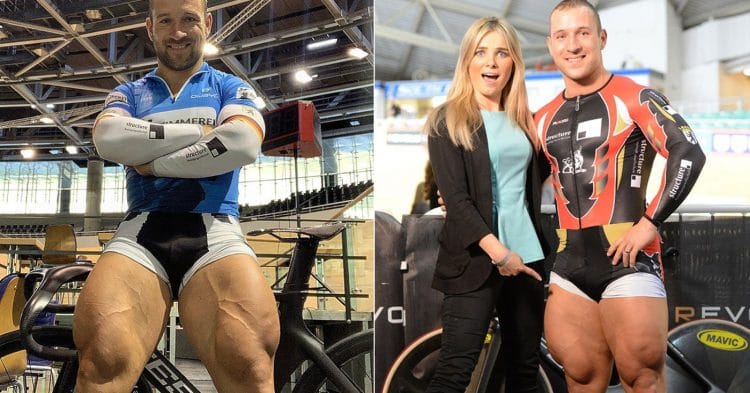 Allow us to introduce you to Robert Forstemann from Germany, who might just be the next Quadzilla. One look at his legs and you might think they’re photoshopped but that’s not the case. And what’s crazy about his insane leg development is that he isn’t even a professional bodybuilder… what?!

Forstemann is a champion track cyclist whose gigantic wheels went viral after a social media post during the 2012 Olympics in London that showed how massive his quads were compared to the quads of his teammate Andre Greipel, who is, by the way, no slouch in that department.

It’s apparent that Forstemann has superior leg genetics and something we don’t see every day, even in elite bodybuilders. But let’s not ignore his upper body development either because he does have a very impressive physique overall, and obviously trains hard. It’s just that his 29-inch (his legs might even be bigger than that) legs stand out and he’s well aware.

Read: A Simple Old-School Way To Grow Your Legs

Those legs don’t slow him down either as Forstemann has competed at a high level, winning several competitions and a World Championship in the team sprint in 2010.

He even took on a 700w toaster several years back to see if he could generate enough force to power it. Well, not surprisingly, he toasted a slice of white bread by generating 0,012kWh of power but it wasn’t easy, even for a professional cyclist with legs like a pro bodybuilder.

This was part of a graduation project from the Stockholm Academy of Dramatic Arts filmed in Stockholm, Sweden. Check it out below…

Forstemann utilizes compound movements such as squats, deadlifts, leg press, kettlebell swings, box jumps, sled pushes, plus he utilizes leg extensions. He’s darn strong too, being able to squat 220kg/ 485lbs for reps as shown in the vide below.

Watch him train legs with a bodybuilder…

“Quadzilla” may just be a fitting name for Robert Forstemann (at least we think so). But he’ll have to share the nickname with the many “Quadzillas” roaming the earth and the legends such as Tom Platz, and Paul Demayo who will always be known as Quadzilla for their legendary leg development.

What do you think? Is Robert Forstemann deserving of the name “Quadzilla”?

Most fitness coaches and bodybuilding experts agree that lower body training is the key to a good physique. After all,...

Leg extensions are a very popular exercise. Unlike the squat, lunge, and leg press, the leg extension is an isolation...

Throughout his career, Tom Platz was know for his ridiculously massive and defined legs. He showed recently that, even well...

Bodybuilding is a sport packed to the brim with big, muscular athletes, but who is the strongest among them? Today...

"The Quadfather"... "The Golden Eagle"... these are the nicknames Tom Platz has earned over his career with his elite leg...