Tia-Clair Toomey talks about her energy and calorie spending ahead of the 2022 CrossFit Games. 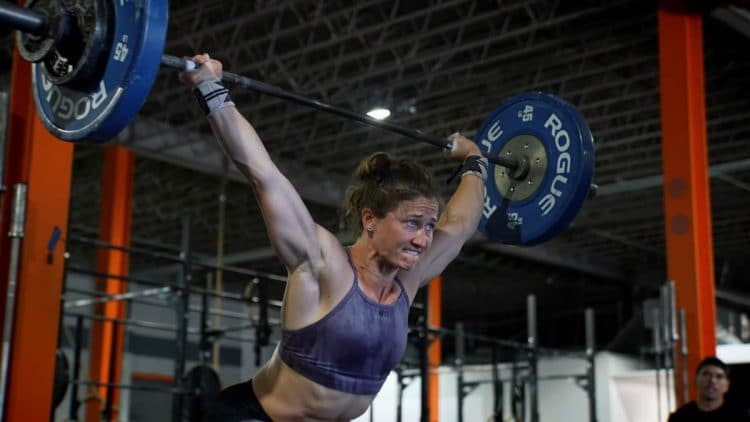 To become the World’s Fittest Woman, one would have to possess incredible skills, great planning, and a hardworking attitude. However, only Tia-Clair Toomey knows what it takes to claim the Fittest Woman On Earth® title five times. Although she shares insights during training sessions, it’s never clear how much energy she puts into them. On her YouTube channel, Tia-Clair has posted a video where she discusses her daily calorie expenditure.

Calories are directly correlated with energy and serve as a way for us to understand someone’s effort and diet needs. Tia-Clair Toomey has made multiple videos on her full day of eating, where she revealed that her intake ranges from 2500 to 3000 calories. She has now brought a camera to film, and a smartwatch to count her calories during a recent training session.

On this specific day, Tia-Clair Toomey was met with two very demanding workouts in regards to calorie expenditure. The first workout was on an athletic track, as Tia-Clair ran around seven kilometers. She performs running on the track twice a week, so those two days are usually higher in calorie spending.

It is important to acknowledge that elite-level athletes burn fewer calories than average athletes, as their body has learned to keep it under control.

“As you get fitter, the requirement of calorie burning expenditure isn’t as high,” Shane Orr, Tia-Clair’s coach and husband.

After a workout which lasted around 50 minutes, Tia-Clair Toomey’s watch showed that she burned 528 calories.

Following Tia-Clair’s track session, the video jumps to a montage of her gym workout. She can be seen performing over-the-bar burpees, cleans, and deadlifts. Upon the montage finishing, Tia-Clair started to recap her day while doing some light stretching.

“Before the track I had about 600 calories and then burnt about like 530… I also had a second breakfast and that would have equated to around about 700 calories (intake)… So far, I am well above what I’ve actually exerted already.”

While Tia-Clair Toomey burns tons of calories, she also consumes enough nutrients to stay energized throughout the day.

“When I think about how many calories I will burn throughout the day, obviously it depends on my training and what I am doing… So for today, I think I will probably be around high 3000, mid 4000 for today’s sessions.”

After finishing the entire workout, Tia-Clair Toomey’s calories burned came out to just over 1500. Also, Tia-Clair had to take into account her BMR (Basal Metabolic Rate), which represents how many calories she burns while sleeping and resting. Overall, her estimation of around 4000 calories seems pretty accurate for that specific day.

Tia-Clair Toomey also lives a busy life regarding her everyday chores which are not a part of her training. So, all of that stress and mental activity burn a few more calories. Her overall expenditure, however, illustrates how dedicated and passionate she is about the sport. She is hoping that it will result in her sixth CrossFit Games victory, which would make her the winningest athlete in the sport. Tia-Clair’s first attempt at winning her record-breaking title will be at the 2022 CrossFit Games, which are set to take place Aug.3-7, 2022, in Madison, WI.