Joseph Baena has learned from the best and recently gave fans a sneak peek into how he gets going for the week. 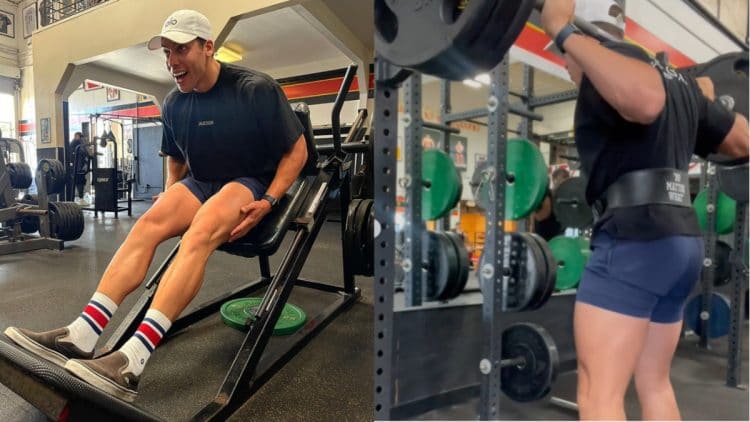 Inheriting a passion for bodybuilding from his father, Joseph Baena has learned a trick or two when it comes to pumping iron. In a recent Instagram post, Baena voiced his appreciation for starting the week off with leg training.

Given his lineage, it’s safe to say Baena understands the finer details surrounding bodybuilding and exercise. His father, Arnold Schwarzenegger, a seven-time Mr. Olympia, is one of the most successful bodybuilders to come out of the sport. In addition to recreating some of Schwarzenegger’s most famous poses, Baena took after his father and kickstarted an acting career a few years ago. He turned heads with his buff build last year on the set for one of his acting projects, Lava. Despite Baena’s increasingly busy schedule, he never stopped working out and often shares his routines with fans.

As of late, Baena demonstrated a muscle-building yet taxing chest workout inspired by his father’s exercise routines. Whether it’s paying attention to form or offering his fans tips and tricks on how to maximize gains during a workout, Baena has seen a lot in the fitness sector during his 24-year lifespan.

Baena commonly enlists the help of his father for in-person training. When he first began lifting weights, he utilized a popular muscle-building guide, The Encyclopedia of Modern Bodybuilding, which of course, Schwarzenegger had a hand in creating. Baena, like his father, rarely, if ever, misses a day of training.

Joseph Baena Not Lacking Motivation on Leg Day: “Time to Get Up and Get After It!!!”

In a recent post made on social media, Baena showed off his leg day gains after his demanding workout.

Started the week off with legs. What are you hitting?” Joseph Baena wrote.

In the Instagram update, Baena is wearing a lifting belt and performs a set of weighted barbell squats for three grueling reps, as displayed in his post. In addition to bodybuilding, Baena has learned a lot from his father in terms of diet.

Joseph shared his diet plan with fans. Breakfast, lunch, and dinner are staples for the aspiring actor, but he also enjoys consuming a protein shake from time to time. Joseph doesn’t shy away from cheat meals occasionally and firmly believes in keeping diets as simple as possible.

Baena has expressed interest in making a bodybuilding debut one day but there are no plans set in stone. He was seemingly interested a few years ago, but it looks like those ambitions have been put to the sideline while he continues his acting career.

While Baena hasn’t followed in his dad’s footsteps to a T, it’s evident that he has potential to do well in the sport given his drive and genetics. After hitting an intense leg workout, Baena underlined the importance of starting out the week strong.