Check out how the four-time Mr. Olympia attacks leg day: "We don't miss no matter what" 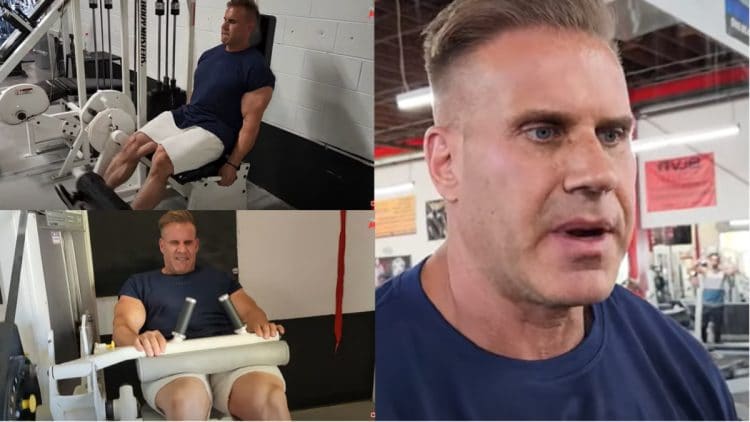 Lauded for his commitment to staying active and healthy in retirement, Jay Cutler is one of the most decorated Men’s Open bodybuilders to take part in the sport. In a recent video, Cutler shared a series of demanding leg workouts to help build the glutes, hamstrings, and quads.

Cutler is a four-time Mr. Olympia, well known for his epic rivalry with Ronnie Coleman, a bodybuilder who holds the distinction of winning Mr. Olympia a total of eight times. This feat has only been accomplished by Coleman and Lee Haney. One of Cutler’s strongest attributes was his lower body, a feature he showed off a number of times on stage. Cutler dethroned “The King” at 2006 Mr. Olympia, en route to earning gold.

As one of the more open athletes in the sport, Cutler doesn’t shy away from telling fans how he got to where he is. During his successful tenure as an IFBB Pro, Cutler admitted that he had to eat over 140 eggs to maintain his shredded physique. Despite the touchy subject, Cutler has also given fans an idea as to what type of cycle he utilized throughout his career. While he may have hung up his posing trunks, it hasn’t stopped the bodybuilding legend from making the most of his time training.

Find a full list of the workouts used in Cutler’s video below:

Cutler likes to start with a warm up movement and hits seated machine curls. He practiced one set for 14 reps during this exercise.

During the second exercise, Cutler appreciates dumbbell stiff leg deadlifts because it taxes his hamstrings and glutes while taking ‘the lower back out of it.’ He fires off one set for 10 reps.

“Alright so stiff legged deadlifts guys. With these, you notice I’ve been doing a lot of dumbbells for all my videos in the last few years. I use to do dumbbells, barbells, leg presses high and wide, which I think I can duplicate this movement but I just love dumbbells because I feel like I can focus on my hamstrings and glutes and take my lower back out of it.

What I’m doing here is 10-12 reps. I’m really just squeezing the hamstrings, but not coming up to top position locking out, if you notice. Always second or third in the movements.” Cutler shared.

Like most of his exercises during this leg day routine, the former Mr. Olympia performs one set for 10 reps.

According to Cutler, he gets more out of his leg extensions when he adjusts the machine to go as far back as possible. This exercise was performed for four sets in the 10-12 rep range. “The Comeback Kid” advocates for leg extensions because they engage everything that he’s trying to work out on leg day, from glutes and hamstrings to the quads.

“I have this all the way back. Meaning, I’m going to go in, so I’m going to get a better stretch so it doesn’t limit me from going so far down. I’m going to do four sets here. I did one kind of a feel set since I’m already warm from doing hamstrings. I’m going to focus on 10-12 repetitions. What I’m trying to do is pre-exhaust the legs a little bit. Then we’re going to move into a leg press movement. Engage everything, glutes, hamstrings and quads but focus on the quads here.”

In particular, leg extensions are a workout Cutler enjoys because they are ideal for building the teardrop, or the leg muscles closer to the knees.

“I feel these a lot in the teardrops. So, when the pad is able to go that far back, I feel more in the lower. Everyone always wants to develop the teardrops right, closer to the knees. I think the stretch of pulling down really helps with that. No fancy footwork.”

For one of the more demanding movements, Cutler hits the leg press machine for 2 sets, the first set consisting of 15 reps, before finishing his last set for 8 reps.

It wouldn’t be leg day without squats, and Cutler decided on a barbell variation. He performed 15 reps during his single set.

Despite a busy schedule, Cutler finds motivation by pushing the pace at the gym training legs, an area he deems as the ‘hardest body part to train’. He finished off the routine with one set of 10 reps.

“Even though it was an abbreviated workout for me, I only did four exercises. I love it man. Why do I like training more than ever now?”

While he has stepped away from the sport in a professional capacity, Cutler remains an important figurehead in bodybuilding. The 48-year-old hasn’t slowed down in the slightest and routinely shares his workouts with fans. Cutler maintains that training has become more like meditation in retirement.

Cutler’s exercise routines are a welcome addition to the fitness community. It’s always helpful to see how the decorated bodybuilder approaches leg day, one of the more dreaded body parts to train. After hitting a number of leg exercises, it appears Cutler still has plenty of gas left in the tank.