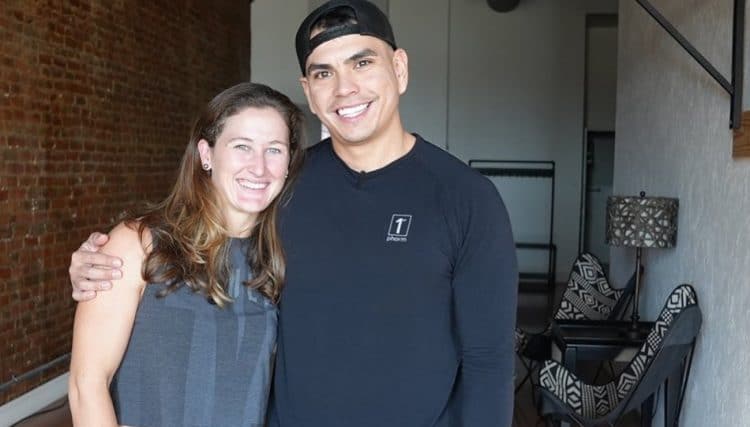 There doesn’t seem to be much else to achieve after winning the Fittest Woman on Earth ® title a record four times… well, that certainly isn’t what Tia-Clair Toomey was thinking after her most recent victory.

Now that the Australian native has a little break before the next CrossFit Games, she’s announced an Olympic-sized move. Lifting weights like an Olympian isn’t exactly new to her, but this time she has her eyes set on the bobsled trails.

This week, Tia-Clair Toomey and her husband announced on Instagram that there was a move in their future. After earning the Fittest Woman on Earth ® title for the fourth time, Tia-Clair Toomey wants to train for the bobsled to hopefully compete at the 2022 Winter Olympic Games.

They will be moving from their current training station in Cookeville, Tennessee, to South Korea for preparation. So now her goal is to qualify for the Australian Women’s Bobsled team.

It’s not the first time Tia-Clair Toomey has given the Olympic dream a whirl. She competed in the 2016 Summer Olympic Games in Rio in weightlifting and came in fourteenth place in the 58kg/128lb class.

This will mean that for a little while at least, Tia-Clair Toomey will not be training with her training partner Mat Fraser. Mat Fraser is a five-time CrossFit Games Fittest Man on Earth ®. Fraser and Toomey have been training together since 2018, at Rich Froning Jr.’s CrossFit Mayhem gym in Cookeville.

Mat Fraser began training there in 2017. They’ve been a training team since Tia-Clair Toomey joined him in 2018. Fraser has yet to remark on the move and what that will mean for his own training.

Toomey’s move has also been announced on the Big Idea Big Moves podcast.

“I’ll be going and training with the Australian Bobsled Team. This is something that has been in the works for over 18 months now. Obviously, we have the Winter Olympics in 2022 so the goal is to try and qualify for the Winter Olympics. I’ll be training in South Korea and doing bobsled.”

Also on the podcast, Tia-Clair said she was waiting on the VISA. Her calendar for the next year is to spend the next few months training for the 2022 Winter Olympic Games.

She’s Not the Only One

Tia-Clair Toomey’s announcement may not be a huge surprise to the elite end of the CrossFit community. Other CrossFit athletes are also training for the Olympic Games for the same sport. If she qualifies, she will be competing against them again.

Colleen Fostch and Kelsey Kiel have moved as well, but to Lake Placid, NY, to qualify for Team USA’s bobsled team. Colleen has been selected to be a part of Team USA at the time of press. Emma Baumert is also pursuing both bobsled and skeleton with Team USA.

And for Team Australia, Tia-Clair Toomey is joined by James Newbury who has already been touring with Team Australia and racking up some bobsled experience.

Weightlifting and running with bursts of short-term intensity are key markers of CrossFit talent. They are also key markers of bobsled talent. This is one reason why so many CrossFitters look to bobsledding with their Olympic dreams.

And, the question on everybody’s mind is, does this mean Tia-Clair Toomey is saying goodbye to CrossFit? No.  She will return to CrossFit for the 2021 Open and CrossFit Games.

We will be following this story and update you on every next move for Tia-Clair Toomey and her husband Shane Orr.