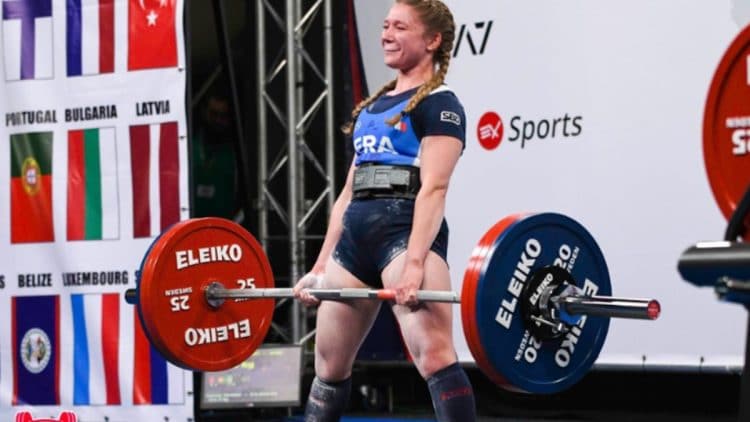 The recent training sessions of Tiffany Chapon were the reason many powerlifting fans were eager to watch her compete again. Tiffany has been unofficially breaking World Records regularly, and now she followed up on that. She took part in and won the 2022 IPF World Open Classic Powerlifting Championship, which is taking place from June 6-12, 2022, in Sun City, South Africa. The competition just started, but Tiffany has already set some big expectations for the remainder of it.

Tiffany Chapon competed in the raw 47-kilogram weight class, and came out victorious with no one to contest her. Chapon also broke the Squat, Bench Press, and Total open IPF World Records. In addition, she claimed multiple Junior IPF World Records.

*Rantala Hanna previously held the World Record of 95.5 kilograms (210.5 pounds) and she set it at the 2017 IPF World Classic Powerlifting Championships.

Considering that Tiffany Chapon is just stepping into her twenties and has been doing powerlifting professionally for less than two years, it is very hard to fathom the extent of her achievements. Seven of the nine sanctioned competitions she participated in were won by her. Furthermore, Tiffany is now a 2x IPF World Champion, 2021 EPF European Champion, and 3x French Champion.

Tiffany Chapon now also holds three Open IPF World Records and four Junior World Records in the 47-kilogram weight class. Tiffany’s greatest achievements have all occurred in the last twelve months, so it will be interesting to see what the future holds for her.