Tiffany Chapon is looking to demolish the World Record at the upcoming IPF World Championships. 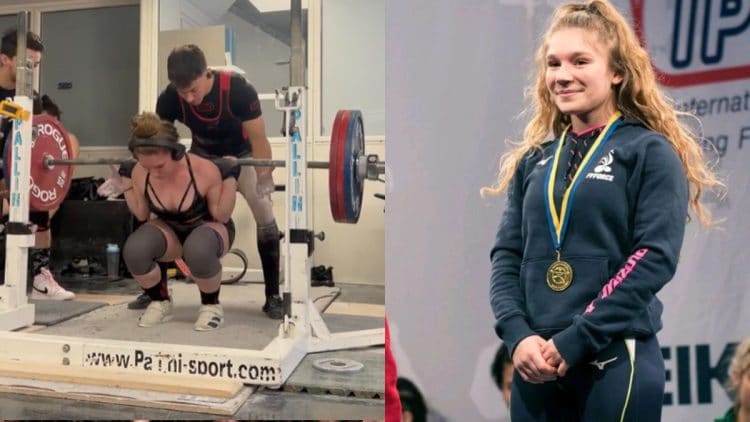 It definitely seems that Tiffany Chapon is ready to put up an iconic and historic performance at the 2022 IPF World Classic Powerlifting Championships, which will take place from June 6-12, 2022, in Sun City, South Africa. Heather Connor seems the only athlete who could rival Tiffany in the 47-kilogram weight class. Tiffany will also be chasing multiple world records, most notably in the squat event. On May 7, Tiffany posted a 166-kilogram (366-pound) squat on her official Instagram page.

It counts as an unofficial IPF World Record, as it is 13 kilograms (28.7 pounds) heavier than what Tiffany lifted at the 2021 EPF European Classic Powerlifting Championships.

Tiffany Chapon’s squat is raw by powerlifting standards, as she only used a lifting belt, knee sleeves, and wrist wraps to aid her in the lift. Tiffany did experience some turbulence in the middle part of her lift, but she managed to lock it out after a long grind.

Tiffany’s Chapon only had one powerlifting competition this year. She took part in 2022 FFForce Championnats de France Élite de Force Athlétique. Alongside that, Tiffany also claimed all four new competition PRs in this contest.

Tiffany Chapon is the reigning 2021 European and World champion in the 47-kilogram weight class. Despite still being very young, she has taken part in a total of eight sanctioned competitions, and won six of them. Tiffany currently holds all French national raw powerlifting records in the 47-kilogram weight class, as well as an official IPF Squat World Record. She accumulated all of her immense success in just over one year of competing, as her first sanctioned contest came in December 2020.

It is important to note that Tiffany unofficially broke the IPF World Record by a 13-kilogram (28.7-pound) margin. So it is very likely that she will claim the official record in one month’s time. She is considered the greatest rising star in the sport for a reason, which she proves on a weekly basis. This is not the first time that Tiffany is Unofficially breaking the World Record in training, but her recent lift is one of the greatest she has ever done. Chapon continues to outdo herself while pushing her squat.