Retired bodybuilder Dennis James goes scorched earth on Tony Huge over a supplement contract dispute: 'these guys were so unprofessional' 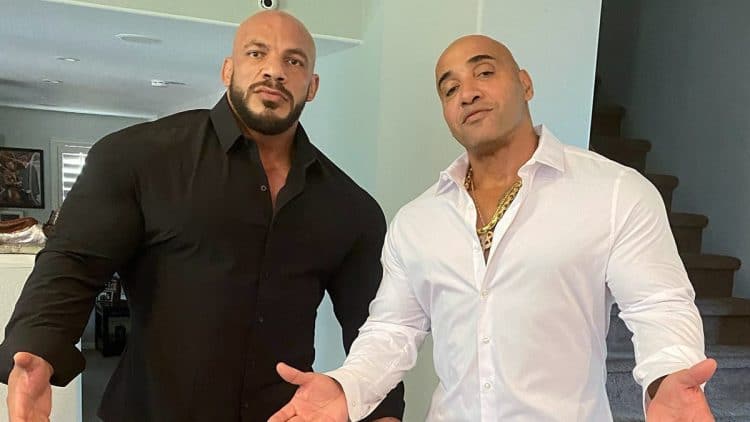 Retired IFBB Pro bodybuilder Dennis James now coaches Mamdouh ‘Big Ramy’ Elssbiay, though recently had some dirty laundry to air in regard to supplement negotiations. After Big Ramy was offered a new contract behind his coach’s back, James was flabbergasted by their unprofessionalism and called the company (Enhanced Labs) the ‘biggest clusterfuc* he’s ever seen.

Bodybuilder Dennis James has been around the block, having performed on some of the sport’s most prestigious stages. While he is in the midst of retirement, that hasn’t stopped the decorated Pro from maintaining a pivotal role in bodybuilding. He is one of the notable coaches behind the two-time reigning Mr. Olympia champion Big Ramy.

James and Ramy have been close for some time. The bodybuilding community was left wondering where Ramy was following his absence at the 2022 Pittsburgh Pro, an event which he was expected to guest pose at. While many looked at James for answers, the reigning Mr. Olympia ultimately provided an apology for missing the show weeks later. While it appeared Ramy had issues flying, no one knows exactly why he was unable to fulfill his guest posing obligations. The absence left James disappointed. However, there are a number of issues still on his mind, like a recent contract dispute involving Enhanced Labs.

In a recent Podcast video on Muscle and Fitness YouTube channel, James gave his side of the story after negotiations with Enhanced Labs, backed by Tony Huge, collapsed. After Tony Huge mentioned that Ramy had plenty of obligations in the middle east, he expressed that the Egyptian native wasn’t concerned with North American markets, including his supplement company.

“I’m going to bring up [Big] Ramy now. People are saying, ‘oh! His sponsor kicked him out, he lost his sponsor.’ Then, they bring, I don’t know where they had Tony on the podcast, somewhere on a show. He explained and he didn’t really want to tell the truth, of course not. But he didn’t trash Ramy.

He just basically went with what people are thinking and saying, ‘yeah he’s got so much shit going on in the middle east, he doesn’t need it, blah blah blah.’ It’s a bunch of bullshit! I was waiting for a title to tell the truth about what really happened. Because at the end of the day, nobody kicked anybody out.” Dennis James explained.

James maintains that he and Big Ramy abided by ‘everything’ in the Enhanced Labs contract and voiced his belief that Tony Huge’s business was by far, the ‘most unprofessional supplement company’ he’s ever been associated with.

“First of all, he did not lose his sponsor. He did not lose his sponsor because he didn’t do what he’s supposed to do. We did everything we were supposed to do by contract. Every single thing that was in the contract was done, and even more. Those are the most unprofessional people that I’ve ever worked with in my whole entire life when it comes to supplement companies, and I’ve been around. The most unprofessional supplement company. They had no idea.”

After being contacted by Tony Huge about a potential offer, James shot down the contract, implying that Huge and Enhanced Labs were essentially offering ‘gas money.’

“Tony Huge, who is doing all this crazy stuff on YouTube, he’s over there in Thailand, so he’s basically not doing nothing. I’m going to tell you guys, here’s what happened. They contacted me right after Ramy won his first Olympia. To somebody, it was the guy who was working as a CEO or whatever. He contacted me and made an offer. I told him basically, we don’t need gas money okay? This guy had no idea. He didn’t know any bodybuilder. He didn’t know who I was. He didn’t know who Ramy was.”

James: “We did Everything We Were Supposed to Do”

James explained that he flew out to Sacramento, California for another meeting, which he supported because his plan was to negotiate solely on behalf of Big Ramy. However, it turned out that the supplement company was interested in signing James and Big Ramy together.

“I met these people solely to negotiate with Ramy because that was the deal. We did the Cheesecake Factory, this guy sits in front of me, with this other guy Trever, who develops products for them. He said, ‘we want to sign Ramy and we want to sign you too.’ I said, ‘me? Why me?’ He said, ‘yeah because we think you guys are a great team and we want to keep you guys together.’ This is how it all started.

To make a long story short. Now, we ended up with two contracts. One for Ramy, and one for myself. We did everything we were supposed to do. The problem was these guys were so unprofessional they had no idea how to run this business. They though, you know, spending all this money on stupid shit, at booths at the expo. Listen, you don’t have to have a booth or a crazy amount of money. When you have Mr. Olympia there, you can just put two tables there, and you’ll have a crowd.”

One primary concern for James was the fact that the Enhanced Labs contract paid out with the help of three different distributors. In the end, all three entities were fighting with each other, creating a huge ‘clusterfuc*,’ as James mentioned.

“The other issue was that the money didn’t come from Enhanced by itself. The money came from two or three total distributors. Enhanced here, a distributor in Dubai and a distributor in India. They all had to chip in to pay Ramy. Every month. The biggest problem that we found out real quick was they were fighting with each other. It was the biggest clusterfuc* of a company I’ve ever seen in my life.”

For Dennis James, the issue was cut and dry. After the supplement company (Enhanced Labs) didn’t pay for a few months, he and Big Ramy stopped posting, which was part of the contract.

“At the end of the day, some of these guys weren’t able to pay anymore. So now, what do you do if you don’t get paid? You don’t get paid one month. You don’t get paid the second month, we’re not talking a couple of thousand dollars here. But now, we’re still doing our thing, posting, still doing out thing. In the meantime, they tried to go behind my back and negotiate with Ramy another contract for less money. Those guys are fuc**n crooks. This is the biggest bullshit I’ve ever seen. At the end of the day, they did not pay for four months and that’s when we stopped posting.” Dennis James reiterated.

Clearly, a lot of negotiations have taken place behind the scenes, but James is adamant that his experience with Enhanced Labs highlighted their unprofessionalism. The last straw for James was after Enhanced Labs tried to offer Big Ramy a contract for less money behind his back. After no payment was rendered for four months, James and Big Ramy stopped adhering to the Enhanced Labs contract, which included social media posts.