Heather Connor claimed a silver medal and a new World Record at the 2022 IPF World's. 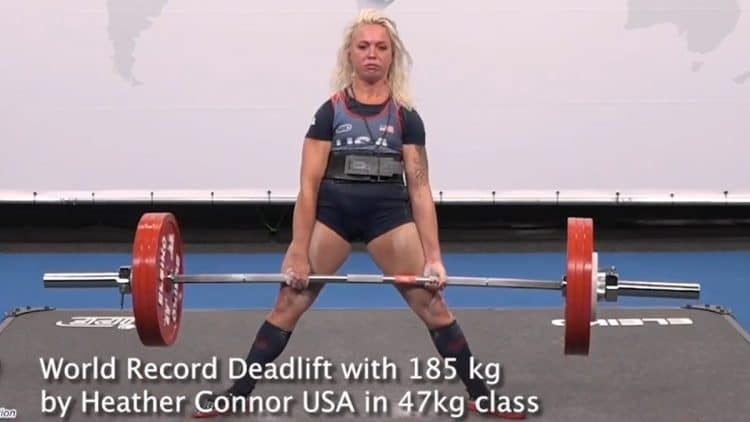 The first day of the 2022 IPF World Open Classic Powerlifting Championships is well underway, and we got to witness an incredible battle in the women’s 47-kilogram weight class. Heather Connor and Tiffany Chapon both went to Sun City, South Africa to try and win another World Championship title, but only one of them could come out victorious. She did not succeed in beating Chapon, but she still brought a new World Record home.

Heather Connor deadlifted 185 kilograms (407.9 pounds) to set a new U47KG Raw IPF World Record. As lifting straps are not allowed in powerlifting, Heather only used a belt to aid her in breaking the record. Her style of lifting was a combination of sumo stance and a mixed grip.

Despite finishing in second place, Heather Connor still considers that her performance could have been better.

“Not my best. Certainly not my worst but today is what I had in me. The stronger lifter today won and I’m perfectly ok with that.”

“My circumstances weren’t ideal no matter what way you look at it: constant cancellations and 5 days of travel to get somewhere which at one point almost seemed impossible. Missed training days due to these circumstances and all I can say about it is: it is what it is. It’s rough hitting numbers you can rep easily on a good day.”

Check out all of Heather’s lifts here:

Heather Connor has been competing professionally in powerlifting since 2014, and the 2022 IPF World’s were her 22nd sanctioned competition. She has won 15 of those and claimed numerous World Records along the way. Heather’s competition PRs are also better than any of her lifts from this World Championships. However, IPF only counts lift performed in a competition sanctioned by them as actual records, and Heather performed all of her PRs under different federations.

It is clear that Heather Connor has mixed feelings about the 2022 IPF World Open Classic Powerlifting Championships. However, she has once again demonstrated her status as one of the best deadlifters. After all, the 185-kilogram (407.9-pound) pull is 4x her bodyweight, which is impressive, to say the least. Heather could also become the first woman in the IPF 47-kilogram weight class to deadlift 200 kilograms (441 pounds).