Rob Kearney looks prepared for the first event of the 2022 Arnold Strongman Classic. 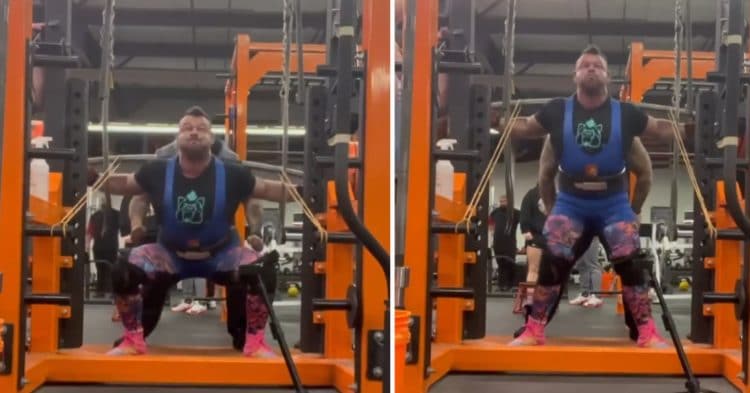 Rob Kearney knowns as “The World’s Strongest Gay” is currently in preparation for the 2022 Arnold Strongman Classic (ASC), scheduled to happen on March 4th and 5th in the Greater Columbus Convention Center in Columbus, Ohio. Rob has battled some serious illnesses and injuries in the past year, but he seems to be gaining his strength back. Judging by his recent success in the squat session, he has the potential to make some noise at the upcoming ASC.

Check out the recent session Rob shared on his Instagram Page, where he smokes 368 kg (810 lb) squat for three repetitions. Rob used a squat suit, a lifting belt, wrist wraps, and knee wraps. In addition to that, Kearney also used a Duffalo Bar to prevent elbow pain. The bar has a bit of a bend, which allows for easier gripping, and better shoulder positioning.

Rob also used resistance bands, which were placed halfway on the rack in front of him. He explained why:

“The bands are to help me stay upright, and force a vertical spine. This allows me to get the most out of the suit!” wrote Kearney.

At 30-years-old, Rob Kearney has accomplished a lot in his strongman career. His first major international strongman competition was the 2015 Arnold Amateur Strongman World Championships, where he got a 4th place finish. Since then, Rob has been consistently competing for 7 years.

He has participated in the World’s Strongest Man (WSM) three times but has never managed to go to the finals of the competition. His best placing came in the 2019 WSM, where he finished third in his group, only behind Hafthor Björnsson and Luke Stoltman.

As we mentioned, Rob is a static powerhouse, which can be seen in his two best events, the log press and the deadlift. Rob is a Former American Record Holder in the log press event. He held the old record of 216 kg (476 lbs), which he set at the 2020 WUS Feats of Strength – Max Log Lift.

Rob is also one of the best deadlifters in the world, and his greatest lift came in the 2019 Giants Live Wembley, where he deadlifted 440 kg (970 lbs).

In addition, Eddie Hall organized an event to find out who is the strongest pound-for-pound athlete. To find out the results, they compared the clean & press and the deadlift, in correlation to the athlete’s bodyweight. Rob Kearney was pronounced the Pound-For-Pound Strongest Man In The World, after he was able to deadlift 421 kg (928.1 lbs) and clean & press 206 kg (454.2 lbs), with a bodyweight of 131 kg (288.8 lbs).

Rob Kearney managed to finish 6th at the 2021 Rogue Invitational, after coming back from a tricep injury and testicular cancer, now it seems like he is getting better every day. The first event at his upcoming 2022 ASC will be the Max Barbell Squat, and judging by his training performances, Rob could surprise everyone.