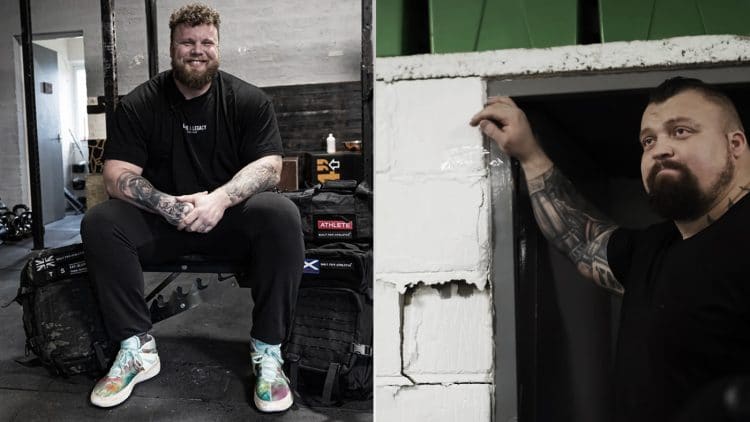 The Stoltman brothers trained with Eddie Hall for one full week ahead of 2021 Britain’s Strongest Man. The video of their loading session during this time was shared on YouTube channel Giants Live STRONGMAN recently. The implements for the session included a duck walk, two barrels, a sandbag, and a tire. The weight of the implements was around 75 to 80 percent of the weights on competition day.

The precise weights were as follows:

While explaining the mode of the workout, Eddie Hall said:

“We don’t want to do the competition weight. It’s all about getting the motions, getting that speed up and I think we’ll time each other and have a little competition…”

After completing a round of work, Eddie Hall shed light on his competition training during his days as a strongman. Hall explained that since carrying the implements is for time, he would allow his training partner a concession of a few seconds to have something to push him. Eddie Hall said:

“If we did five implements, let’s say I gave him five seconds off whatever time he did. That would give me something to sort of aim for. So if he did 40 seconds, I would try and do my implements in say, 35 seconds…”

“It’s all the time made up not in the running but how you manipulate the kit, how you pick it up quick, get into your chest. It’s how quick you pick it up and get going. Because the speed at which you run, barring Tom (Stoltman), it’s pretty much the same for everybody…”

All three of them completed the loading session and it was Luke Stoltman that beat his brother Tom and Eddie Hall at it. But the highlight of the session was a huge crack in the gym wall, courtesy of Tom Stoltman. While leaving the tire down during his turn, Tom Stoltman accidentally bumped it into the gym wall. The impact was so big that the wall gave away. While it has nothing to do with training, the cracked wall did generate a hilarious conversation between Eddie Hall and the Stoltman brothers.

“I mean Tom, I wouldn’t be angry at you for this mate. But you didn’t even beat Luke. You got one second less!” Eddie Hall joked after noticing the broken wall.

“I think Tom going for the wall like juggernaut has put a little bit of a damper on the session!” Eddie Hall continued.

The trio had gone through a crushing leg workout the day before. Therefore the timings on the implements did not reflect their best ability. However, the broken wall did a lot to alleviate the stress of workouts for sure.

Fast forward to January 2022, Tom Stoltman is the reigning World’s Strongest Man and Britain’s Strongest Man while his brother Luke Stoltman is Europe’s Strongest Man. Meanwhile, Eddie Hall has made a transition to boxing and has undergone massive body transformation. Hall is expected to fight archrival Hafthor Bjornsson in a much-anticipated boxing match in March 2022. The Stoltman brothers are expected to make their Arnold Strongman Classic debut in March.