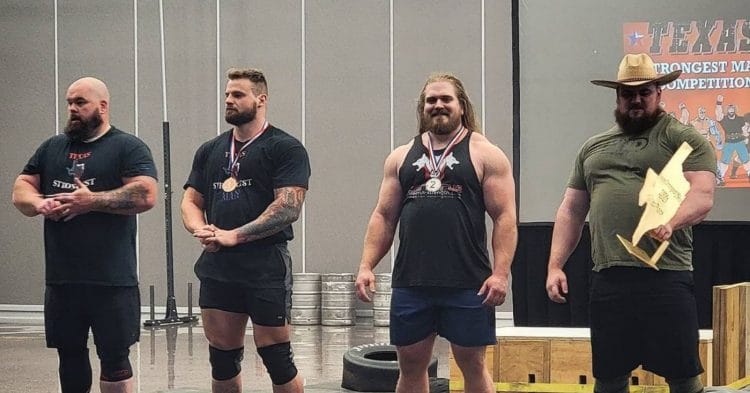 2021 has seen strongman contests get back to a regular schedule, and the most recent of these came from the 2021 Texas Strongest Man over the weekend. By the end of the event, Trey Mitchell III walked away victorious.

Mitchell was not the only Texas native to compete in this strongman show over the weekend. Fellow Texan Gabriel Peña also looked to return to form by taking part in the contest as well.

There were two other athletes who competed in the first ever Texas Strongest Man event, which was hosted by strongman veteran Josh Thigpen, in Pasadena, TX. Alongside the pair of World’s Strongest Man veterans were Brett Vaughn and Matt Gray.

While this was far from the biggest strongman event you will ever see, having Trey Mitchell III and Gabriel Peña on board made it worth checking out. The contest, which took place on April 3rd, saw the quintet take part in the following five events:

The first event of the contest was the Keg Toss, which saw Peña get the better his contemporaries with a time of 17 seconds. Following this was the Log Press and Hand-Over-Hand truck pull, both of which saw Trey come in first.

The fourth event was the Silverado deadlift, which saw Trey Mitchell III and Gabriel Peña tie for first place. However it was the former who pulled out the win in the Atlas Stone event, scoring the win at the first ever Texas Strongest Man.

With Peña in second, Brett Vaughn came in third despite only training in strongman for less than a year. Fourth place was Matt Gray, who finished out the contest in spite of a calf injury suffered during the Arm-Over-Arm Truck Pull event.

Here are the results of the contest:

Check Out Some Videos From The Contest

Congratulations to Trey Mitchell III for winning the 2021 Texas Strongest Man contest. It will be interesting to see if this event grows in years to come.