This looks brutal even from 18-inch blocks. It may also be an unofficial world record too! 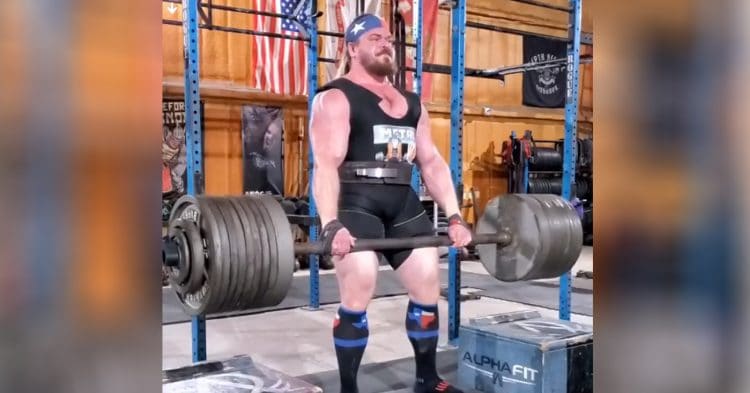 Mexican Strongman competitor Gabriel Pena is another big upcoming deadlifter to watch out for.

We have acknowledged his gift for the deadlift as he’s very strong in this lift. In November 2020, he pulled 1145 lbs/520kg off 18-inch blocks for an easy PR. He followed this up with a 1000 lb/454kg conventional deadlift PR the very next month.

Peña was scheduled to compete at the 2020 World’s Strongest Man contest although he had to pull out during the qualifiers due to health concerns.

But that ain’t about to stop him from going after big numbers in training in an effort to come back stronger and healthier.

He recently pulled 1060lbs/481kg for what may be an 18″ axle deadlift unofficial world record of which he did wearing a suit, belt, and straps).

The axle barbell, as you can tell from the clip below, is a very thick bar compared to a standard deadlift bar. It doesn’t bend either so it’s all weight from the blocks which is incredibly impressive.

Therefore, this would be a separate record from the current 18-inch deadlift record if he made it official.

It’s also important to note that because the bar is thicker and would naturally be harder to grip, Peña was using figure-8 straps and you can see how much they help as he’s using a thumbless grip. Still impressive weight nonetheless though.

I believe this may be an unofficial WR on the 18″ Axle Deadlift. Highest records I could find were Pritchett’s 1,053 lbs deadlift at 2018 Static Monsters and Lalas’s 480 kg deadlift at the 2016 Arnold Asia.

Plenty more in the tank! Fun way to break in the suit 💪“

Watch the lift below…

Pena shared that the closest thing he could find was when Strongman Jerry Pritchett pulled 1053 lbs in 2018 so he’s hoping this lift is the unofficial lift which would be awesome.

Not to mention, he said there was more in the tank, and looking at the lift, we’d have to agree. It didn’t look easy but he certainly could have pulled a little more which is definitely something he can look forward to.

Quite impressive and we look forward to seeing what he has in the near future. Hopefully, his heart issue will resolve and improve so that he can pursue his Strongman dreams.