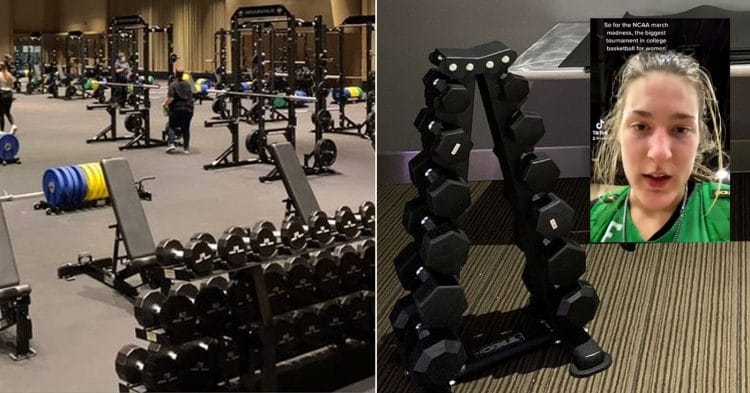 Straight from the “believe it or not” section comes the story of the ridiculous difference in Standford’s NCAA “March madness” preparation equipment for boys and girls. I am usually the last person to give these “gender war” type stories any time of the day, but this was unique enough to pique my interest.

Ali Kershner is an NCAA Women’s Basketball sports performance coach at Standford and she recently took to Instagram to show the comically large difference in prep equipment for the boys and for the girls. The picture in question shows the boys’ workout station which is a giant room stacked with weights upon weights, benches, barbells, plates, racks-you name it. Anything and everything needed to get the testosterone firing and the muscles growing. Then the female stack looks like something a sitcom writer would come up with. It consists of a single dumbbell tower, going up to about 30ish lbs, yoga mats, and a massage table.

Not usually one for this type of post but this deserves attention.

@ncaawbb @ncaa @marchmadness this needs to be addressed. These women want and deserve to be given the same opportunities.

In a year defined by a fight for equality this is a chance to have a conversation and get better.

As you can see by the Instagram post, I am not exaggerating for comedic purposes. The coach spells it all out in the caption. The post went viral pretty quickly and the response from the sports community slamming the NCAA was quick and sharp with everyone from NBA’s Steph Curry to Women’s soccer babe and pro athlete, Alex Morgan trashing the NCAA.

The Washington Post quotes a response from NCAA that reads as follows;

We fell short this year in what we’ve been doing to prepare,” Lynn Holzman, the NCAA’s vice president of women’s basketball, told journalists Friday. She said the NCAA was “actively working” on improving the women’s facilities, including exercise facilities and food

The above article above states that a source from NCAA told them the issue wasn’t money but training space. The boys have a separate training bubble for them and girls have their own separate training bubble for them. So the PR story goes that when the boys got their training space locked in, the girls were simply at the wrong place at the wrong time. Blameless victims of bad luck worse timing, and probably lazy logistics.

However, the story doesn’t end there as a viral Tik-Tok video surfaced showing the NCAA official story has more holes than a block of swiss cheese.

Let me put it on Twitter too cause this needs the attention pic.twitter.com/t0DWKL2YHR

Yep, the NCAA is obviously full of horse excrement. As you can CLEARLY see in the video, there’s plenty of space for an equally large girls’ prep station.  All this started an avalanche of NCAA horror and inequity stories. Ranging from male athletes getting much better “swag bags” to Women’s team potentially getting lower quality antigen testing kits than the higher quality testing kits given to the Men’s team. All in all, this paints a very bad picture to the NCAA community. Showing them as taking care of the guys and sidelining the girls. If I were to play the role of “Devil’s advocate” here, I would say that the NCAA does on purpose because they believe men’s basketball is much more viewed and praised among sports enthusiasts. Thusly, they ensure the boys get the top-notch stuff and the girls get whatever is left. However, this does not excuse this kind of treatment. The girls’ team is, I’m sure, filled with equally talented female players that take their sport seriously. At the end of the day all these girls want is equal preparation conditions as the boys.

YouTube fitness is filled with hot takes and unpopular(or controversial) opinions. It is as the cool kids say it these...