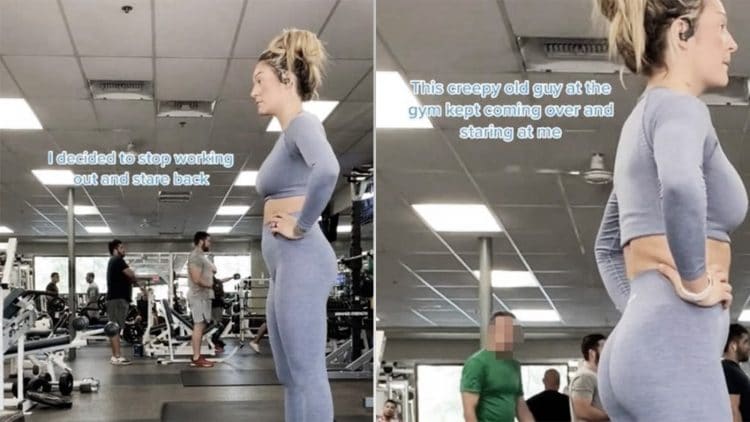 Taking care of your fitness goals and being a regular gym-goer comes with its own set of challenges. However, women sometimes have to come across problems that are completely avoidable yet ever-present. Fitness trainer Heidi Aragon recently experienced one such instance. She let everyone on social media know exactly what happened.

Heidi Aragon shared a video of her confronting a man who was allegedly staring at her while she was working out in the gym. The video uploaded on TikTok shows Aragon being extremely conscious while working out as a man continuously stared at her. But before confronting the man, Heidi Aragon tried various means to deter the man from doing so.

Aragon stared right back at the man and even asked her husband to exercise nearby. However, the man refused to take his eyes off her and the woman had to confront him as a last resort.

“Don’t sit there and tell me you’re not doing something when I have proof,” Heidi Aragon wrote in the caption to her post.

When none of her attempts worked and the man refused to take his eyes off, the woman had to confront him as a last resort.

“I thought he got the picture, so I attempted to do my set. Then I got fed up, and went over to address him. I told him if he’s going to work out in this corner, he needed to stop staring and making me uncomfortable,” Heidi Aragon wrote in the caption to her post.

Heidi Aragon added that the man denied stating at her and instead stated that he just ‘looked around’. However, Aragon’s habit to record her workouts provided her with the necessary evidence. Needless to say, the evidence did not fall in line with the man’s claim.

“I told him I record my workouts and have him on film. He shut up real quick.” Heidi Aragon mentioned.

Courtesy of YouTube channel Random, you can watch her video here:

♬ Real As It Gets – Lil Baby

The viral video uploaded on Tiktok has over 3 million views already and the comments section erupted with comments of women who have had a similar experience.

Here are some of the comments in which women expressed their feelings on the matter and shared similar experiences:

“The gym is supposed to be a judgment-free space. She clearly just wants to work out in peace.”

“Some people go to the gym for the wrong reasons,” someone else wrote. “This is why I’ve never been able to enjoy the gym.”

“You did a good thing by confronting him. These types of men only go to the gym to stare at women. I see it all the time.”

Front Squat vs. Back Squat – Which One Should You Do?