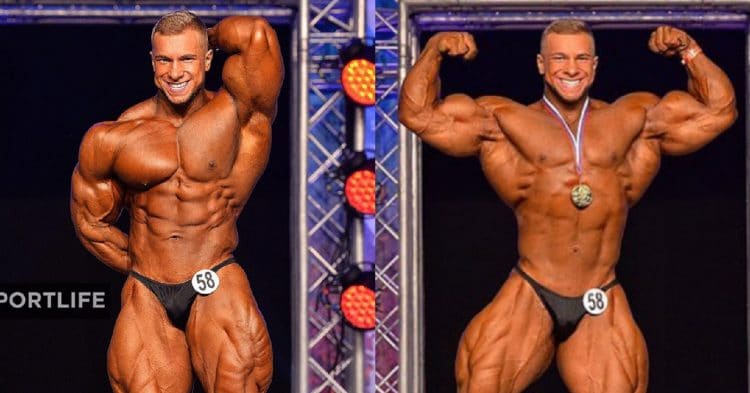 One of the biggest stories to come from the weekend was the emergence of Vitaliy Ugolnikov as a legitimate talent in bodybuilding. After a successful performance, the Russian phenom has his eyes set on some pretty big goals.

There were a lot of strong performances over the weekend, but easily one of the best came from Ugolnikov. The 23-year old has been making some serious waves in the sport already, earning a ton of attention by being one of the first athletes to be signed with Larry Wheels’ PR brand. However he proved that this was for good reason, when he stepped on stage at the St. Petersburg Championships, one of the biggest shows in Russia, winning as an amateur.

So what makes Vitaliy Ugolnikov so special? Well for starters, he has an extremely well developed physique, especially looking at his legs. He is a massive guy, with a small waist and enormous quads. He had shown this to be true before he even stepped on the stage last weekend, but it was clear that he is still improving, after he won that contest. He looks to be the real deal, and frankly appears to be the future of the sport, especially when considering his young age.

Now this begs the question of what is next for GoodVito, after such a strong performance in Russia. Simply put, the sky is the limit for this young star, but he already has his eyes set on some big goals. The next competition he has in mind, is the IFBB Amateur World Championships, next month. Provided everything goes well here, he then hopes to turn around again and compete at the Arnold Classic Europe, in December, to close out the year and potentially win his IFBB Pro Card.

It should be noted that there are actually a few different options for Vitaliy Ugolnikov, moving forward. Due to the split between the IFBB and the NPC, back in 2017, there are two different routes he can take to go pro. He can either continue competing in the way that he is, and earn his status as an IFBB Elite Pro, where he would go on to compete in Elite Pro shows. On the other hand, he has the ability to take part in NPC shows and earn his IFBB Pro Card, which would then allow him to compete in the more well known shows, alongside the sport’s most elite talent.

There are a lot of decisions for Vitaliy Ugolnikov to make, as he continues his career. However one thing is clear, and it is that this young man is going to be a force to be reckoned with in the future.