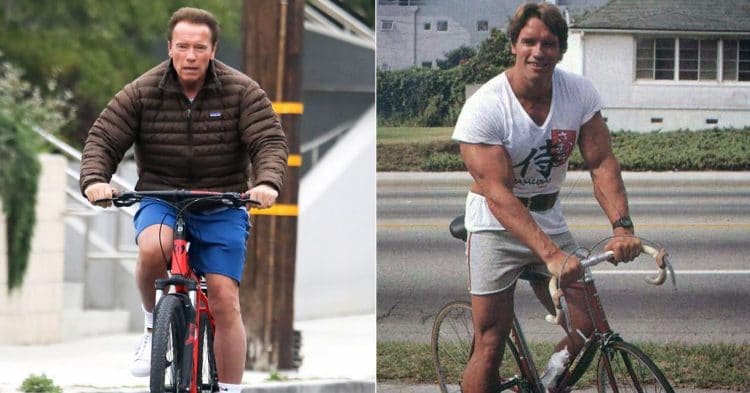 It is no secret that Arnold Schwarzenegger likes to take regular bike rides around town as part of his efforts to stay in shape. His most recent trek showed us that he is still in pretty good condition, even at 73 years old.

It would seem that nothing can stop Arnold from finding ways to stay in shape. Even during the last several months, as the global pandemic wrecked havoc on gyms around the world, the bodybuilding great still found a way to pump some iron. Whether that be in his home gym alongside his donkey, or outdoors lifting some weights, there was never really a time that he stopped working out, even when things were difficult.

Another way that Arnold Schwarzenegger likes to regularly exercise, is by taking bike rides throughout his neighborhood. This is something he does quite frequently, often making stops to remember friends who have passed away, or even sharing the adventure with his son, Joseph Baena.

However the most recent time Arnold was seen on his electric bike, it was during a solo ride around town. As some pictures were taken of him, it quickly became clear to see that he is still in pretty good shape, even after all these years.

Cruising around Santa Monica, Schwarzenegger dons his mask as he rides his electric bike that costs around $5,000. Wearing those shorts, it is evident that his legs are still jacked, despite his age. Then again, considering how often he takes these types of bike rides, that hardly comes as a surprise.

Bike riding is one of Arnold’s favorite ways to pass the time and get his heart rate up. Fans of his Instagram page knows that this is far from the only way he stays in shape, but it is certainly one of the most compound ways. He even takes some time out to wave at fans as he rides, although he can not stop and risk his heart rate dropping back down.

Arnold Schwarzenegger is just one of those guys where it is always a pleasure to see him working out, no matter what he is doing to exercise.

While it is not the same as someone like Ronnie Coleman, who has had a plethora of injuries change the way he can train, it is still nice to see him riding his bike and enjoying the California sun. It seemed like he was having a good time, and we certainly had a good time watching him.