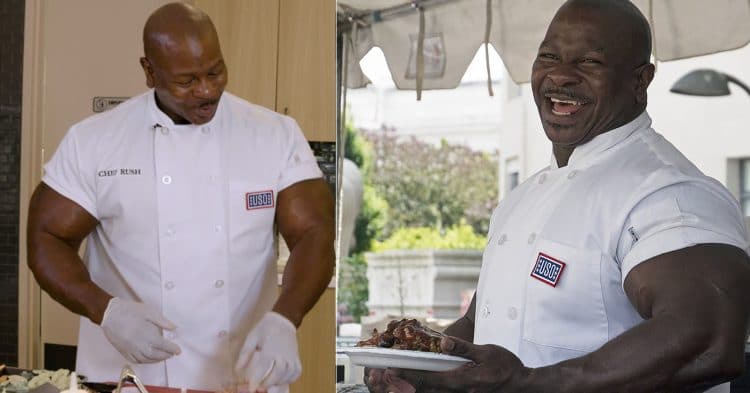 Chances are you have probably seen his photos all over Instagram, Facebook, and every other social media looking like an offseason Mr. Olympia contender.  Recently Men’s Health did a video on him covering his daily eating habits so for today we’ll take a closer look at this Behemoth of a man’s food intake. But before we dive into what fuels this +250lbs beast of a man let’s dive into his past a bit.

Chef Andre Rush, according to Wikipedia, is a retired US Army Master Seargent who first started cooking in the White House back in 1997.  He has served four different presidential administrations and has also worked for the Pentagon. So….yeah, the man really got around.  Now let’s see what it requires to get as huge as Chef Rush;

Well, first off he starts his day at 3 in the morning with a quick meditation session and then proceeds to bang out 2.222 push-ups. No, that wasn’t a typing error. He literally says that he does that every morning as a “morning routine” fresh out of the bed. Chef Rush says it takes him about 75 minutes or so to complete the push-ups. After he’s done with his morning pump up it’s for coffee and meal #1 out of a massive intake of 8 huge meals.

Kale, peanut butter, and an oatmeal protein shake, a few pieces of lean beef, and 24 boiled eggs( 20 whole eggs without the yolk, four whole). That’s his first meal of the day. Then at around 6 am he eats a Peanutbutter sandwich on toasted bread with some homemade jam and a sliced banana.

At around 11 am, the monstrous Chef goes hard in the kitchen once again, this time its lunch. Chef Rush downs two servings of beef and some quinoa for the carbs. Then as a side dish to the main meal, he also adds chopped tomatoes, lemon juice, peppers, garlic, and an ounce of feta cheese.

Just as he’s probably digested the second meal, it’s time for the third “bigger” meal. At 2 pm Chef Rush eats the following:  half a chicken(the bones are saved for a broth), 2 to 3 ounces of steak accompanied with some plain white rice. This is, I’m guessing, his pre-workout meal as after this he goes to the gym to get his swole on.

After he’s done hitting the gym, it’s time for another meal at around 6 pm. The post-workout meal is consistent of sweet potatoes, broccoli, the other half of the chicken, and a protein shake. 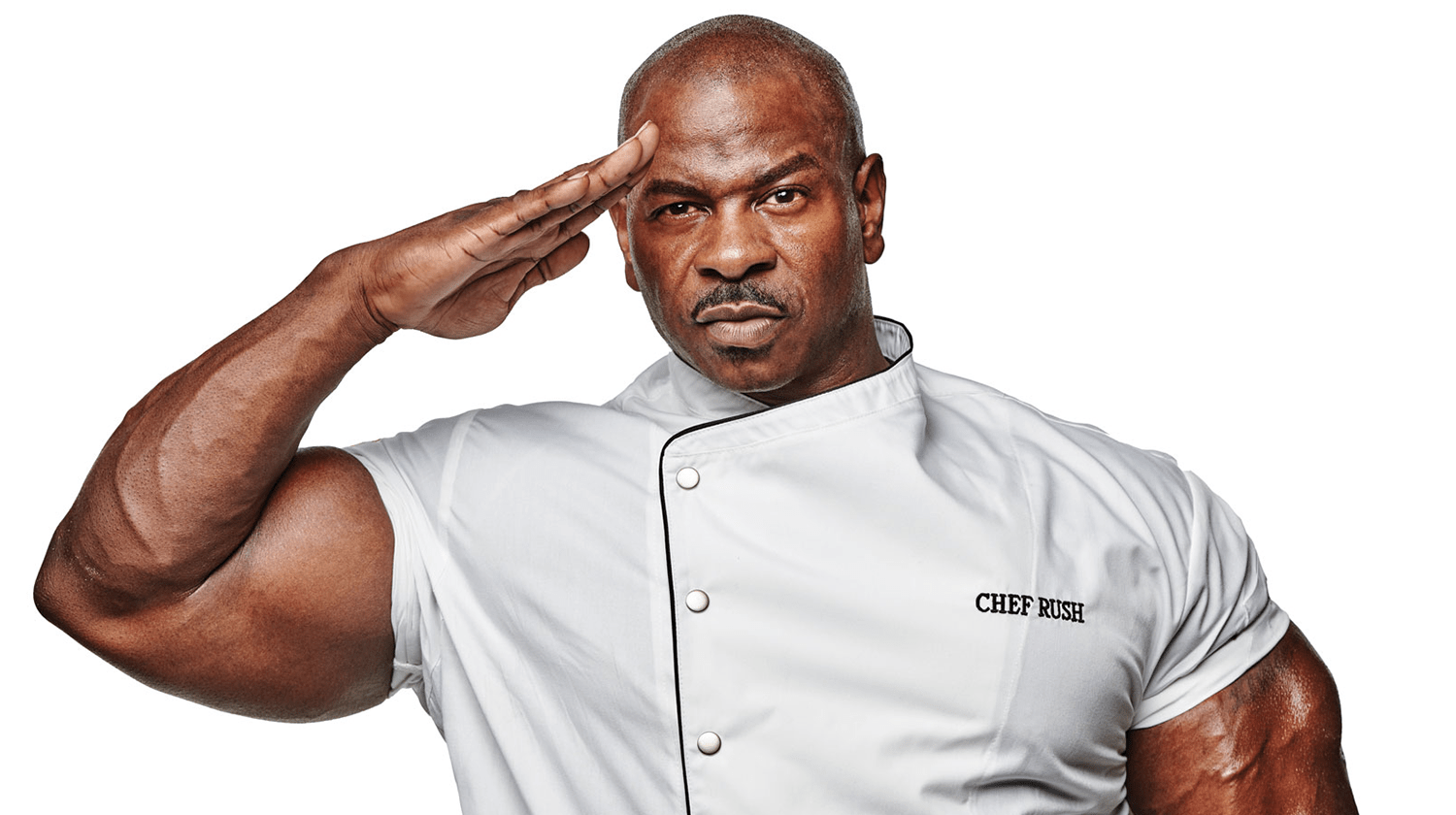 At around 8 pm, it’s time for dinner #2 …or is it lunch #3? I have no idea, I’m feeling bloated just by typing about his daily food schedule at this point. Luckily for me, Chef Rush says this is one of his “lighter” meals which consists of; salmon, chopped tomatoes, olive oil, balsamic and black garlic. He mixes it up into a salad of sorts and that’s it for now. This is the time he goes back to work…between eating and pumping iron, I have no idea how he has time for a 9-5 work let alone how he managed to maintain his gainz while being a White House Chef.

Protein shake time…as you may have guessed, Chef Rush doesn’t just put whey and blended oats in his protein shake. He makes an entire meal out of it.  His protein shake consists of; greek yogurt, oats, blueberries, quinoa, and half a banana. Enough to feed a small child for an entire day. 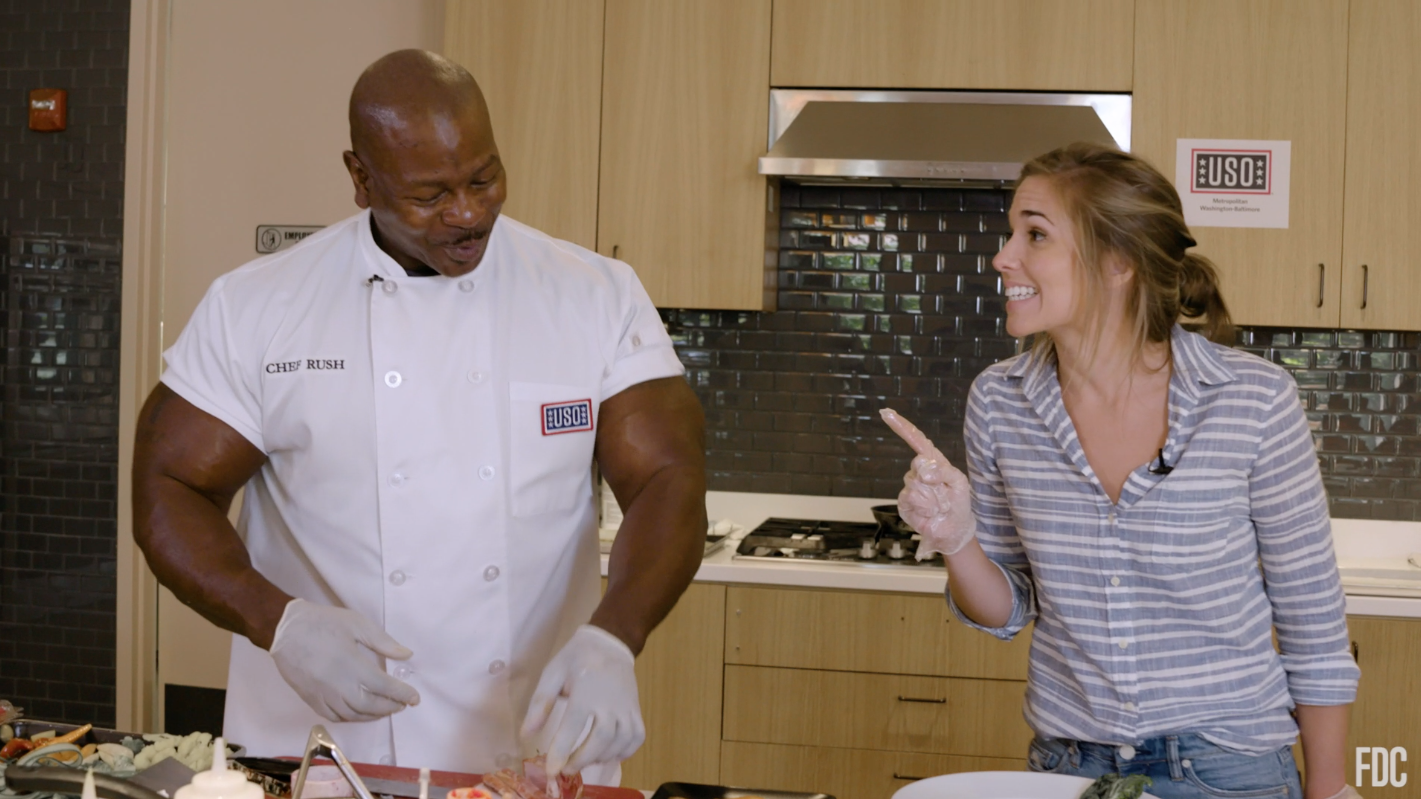 Just as the clock hits midnight, he gets his final meal in. The final meal is the other half of the chicken. Now if you are confused by this part, you are not alone. However, I did leave out a small detail that might clear some things up. Chef Rush explained that his chicken “halves” are actually whole chickens. Which would bring his total daily chicken intake to about 3 whole birds or one small hen house if you will. I’m guessing one of the following happened; A) Men’s Health edited out the part where he mentioned devouring the fourth bird  B) This was a small miscalculation on his part and he meant to say 3, C) One of his meals consists of 2 whole chickens…which if true…I don’t even know how to comment.

Chef Rush went over his daily supplement intake and it’s the usual stuff guys are advised to take.  He takes Zinc, Magnesium, omega-3 fish oil, a multivitamin, EAA (essential amino acids) & BCAA (branched-chain amino acids), and Glutamine. What I found most interesting is his daily macro breakdown. According to Chef Rush, he eats 60% protein 20% carbs and 20% fats….which would mean that at 8000 calories a day he eats around 1200 grams of protein per day!

Now if you are being skeptical about any or all Chef Rush’s claims, don’t worry you are not alone. Both Greg Doucette and MPMD’s Derek covered this video and the conclusion is that unfortunately, Chef Rush’s story doesn’t add up.

Andy Haman Cause Of Death Revealed To Be Pulmonary Embolism

The One Kettlebell Workout

In modern times, powerlifting has grown into one of the most inclusive sports regarding age divisions. This is mainly due...

Jonathan Cayco, popularly known as “Mr. Bench,” is coming off an unsuccessful run at the 2022 IPF World Championships. Cayco...