Breaking down the recent physique updates from Blessing Awodibu, Nick Walker, and Justin Rodriguez to see who has the edge 7 weeks away from the 2021 New York Pro 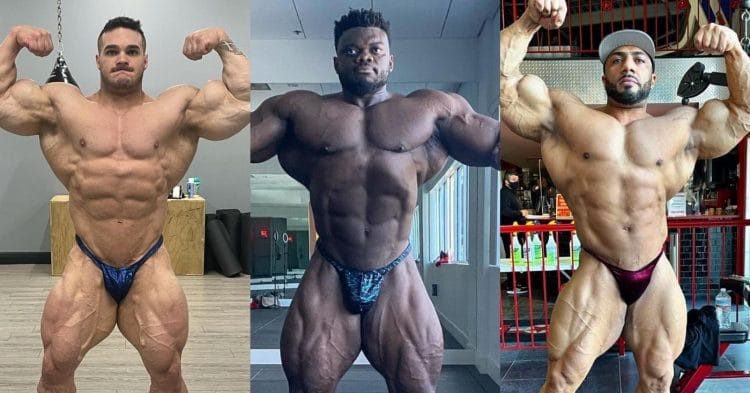 The 2021 New York Pro is around a month and a half away but the anticipation is high, largely due to the likes of Justin Rodriguez, Blessing Awodibu, and Nick Walker looking to compete. Today we take a look at these three athletes, to see who could have the edge heading into this contest.

The New York Pro is typically one of the more anticipated IFBB Pro shows of the year, simply due to the high caliber of athletes it attracts. This year is no different either, even though it is actually taking place in Tampa, Florida because of restrictions from the global pandemic.

With the event slated for May 15th, fans have been buzzing with excitement to see these athletes go head to head. In particular, the rivalry between Nick Walker and Blessing Awodibu has been fun to watch unfold, but Justin Rodriguez is equally regarded as a favorite for the show.

So which of these athletes look better seven weeks out from the 2021 New York Pro? Today we break down the recent physique updates from these three men, and try to determine who may have the edge heading into the show.

By far the most credentialed of the three men we are discussing today, Justin Rodriguez turned a lot of heads with his tenth place performance at the 2020 Olympia. Now he is looking to compete for the first time this year, and hopes to secure his invite to this year’s Olympia by winning the 2021 New York Pro.

We have seen a few updates from Justin ahead of this show, and it is safe to say he is coming in sharp. His most recent post to Instagram sees the prospect giving an in-depth look at his physique, hitting a front double bicep and side tricep pose.

There are certainly some things to like about Justin’s physique here, as well as some things that can use improvements before the 2021 New York Pro. That said, he has arms and legs that will pose some serious trouble to the rest of the competitors.

One of the hottest prospects competing right now, Nick Walker has been providing a fair amount of updates on his training. In fact, these updates have been a bit of the cannon fodder for his rivalry with Blessing, as the pair have traded words in his comments.

With about seven weeks to go until the 2021 New York Pro, Nick has given us an update that has the bodybuilding world talking. He showed off his ultra small waist, and giant arms in this most recent picture, making sure fans and haters alike know that he is going to be well prepared.

Nick is known for looking crazy from the front, with enormous arms and shredded legs. That said, there are still some unanswered questions about his back, and how it will stack up against Justin and Blessing on stage.

Now technically, Blessing Awodibu will be competing before the 2021 New York Pro. He will be making his long awaited debut at the Indy Pro the week prior, but regardless of the outcome there, he will make the turnaround to face off against Nick and Justin.

With him not having competed in several years, there are still a lot of mystery surrounding how he will do next to other top athletes. That said, with six weeks to go until his debut and seven weeks until the New York Pro, he is looking to be in great condition.

As far as we can tell, Blessing’s strong suits are his super thin waist and enormous back, not to mention his overall size. On the other hand, he has been notorious for having troubles with his legs, so it will be interesting to see how he rectifies this by the 2021 New York Pro.

All in all, these three men seem quite evenly matched. Where one person has weaknesses, another has strengths, and vice versa. The anticipation is through the roof to see how these elite athletes look on stage.

The One Kettlebell Workout