Youtubers Brandon and Hudson White once again brought an unusual idea to life. 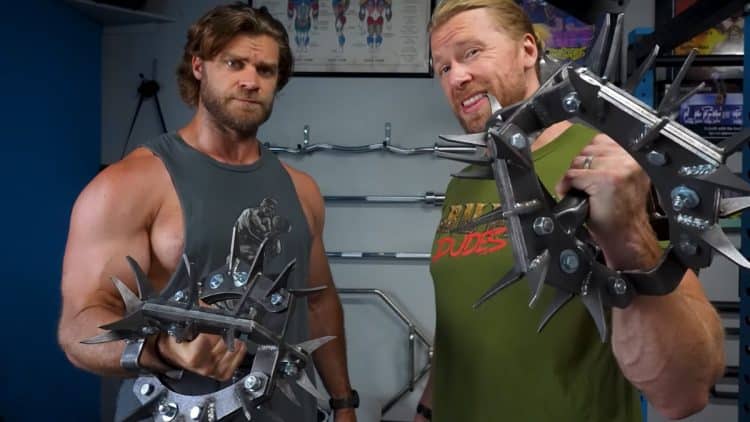 The gym is an enjoyable place to go, but it can also result in quite a few injuries. Mainly it would happen due to over-training or improper movements, but the equipment can also be blamed at times. In contrast, if you are not afraid of injury and lack motivation, you may be able to work out using the ‘World’s Deadliest Dumbbells’.

The ‘Deathbells’, as they call them, is a brand new invention from the brothers Brandon and Hudson White. In order to achieve a higher level of adrenaline while exercising, they took great measures and produced an exceptional piece of equipment. The pair shared the entire process on their YouTube channel, Buff Dudes.

“Is this the world’s most dangerous piece of #gym equipment?”

Related: You Won’t Believe What Happens When Bodybuilding Duo The Buff Dudes Go Vegan For 30 Days

Buff Dudes were successful in making the frightening object with the assistance of a professional blacksmith named Matthew. They came up with an idea, and alongside the blacksmith, choosing the right materials. Matthew then constructed the frame and added 32 spikes per dumbbell. Before welding it all together, Matthew proved how dangerous they are by piercing through a wooden plank with just one side of the dumbbell.

“Never have I been so nervous and so excited to workout… Next to having a child, this is about the best thing a Buff Dude could ever receive.”

Once completed, the White brothers used the dumbbells to smash beer cans and multiple types of fruit. After seeing the dumbbells in some slow-motion footage and incredible cinematics, it would be easy to believe medieval soldiers used them as weapons. Dumbbell spikes were used to pierce beer bottles and drink from them.

“We saw how deadly these things can be, but now it’s time for the true test. Do they hold up in the gym? Wish us luck.”

Upon moving to the gym, Buff Dudes performed various exercises with the ‘World’s Deadliest Dumbbells’. These included some bicep curls, shoulder presses, bench presses, shoulder raises, and more. It’s fair to say that failure on any set was not an option.

Buff Dudes are known for their unusual inventions and passion for the gym. Although they like to make some funny videos, the White brothers also used their fame to spread everything they know about fitness. Over 2.5 million YouTube subscribers are constantly blown away by their amazing content.

Although Buff Dudes’ deathbell could add some spice to one’s training session, it is obviously not a very smart idea. It could bring some serious consequences, but Buff Dudes made it because of their own enjoyment.