WWE's bossman proves that age is just a number for him 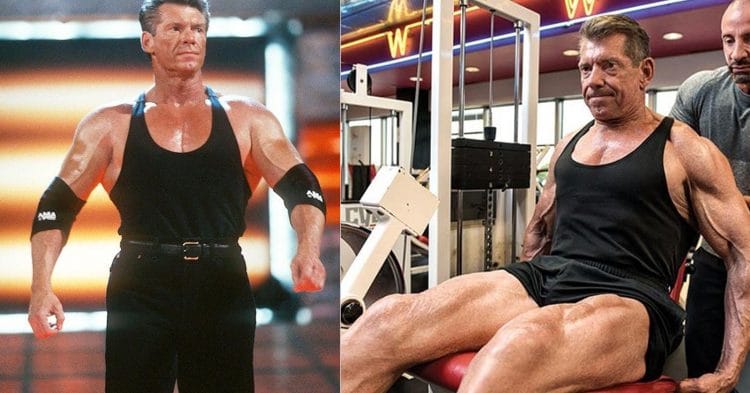 There are some people that are just cut from a different cloth, the Immortal “Vince”, is one of them. He seems to defy age and reason and through sheer stubbornness and grit manages to outwork and out-train people half his age.

He has been ” the man behind the curtains” and part of the show for the good part of the last 4 decades. If you ever watched modern-day WWE and liked a certain superstar or a certain WWE-related product, it is because of Vince. If you have ever watched a certain wrestler(I think they are just called “performers” these days) and hated his guts, it is because Vince WANTED you to hate him.  For better or for worse, Vince has been the Mastermind behind everything WWE-related since the early 80s.

The only thing that can match his business prowess and work ethic, workout ethics, and his sick gainz. He has been on the cover of fitness magazines more times than some of the guys that work for him have. The latest came in 2015 when Vince was 69 years old and looked ridiculously huge and shredded.

In an interview for M&F, he claimed he was around 5% body fat while weighing at 240ish lbs. At nearly 70 years of age. While running a multi-billion dollar company with thousands of employees. He said that his, then-current, squat PR was 560lbs with a goal of getting it back up to 600lbs, while he was still pushing 700lbs on the squat while he was in his 60s.

Fast forward a few years later and you would think that a man that’s half-way done the seventh decade of his life will be slowing down or doing some lightweight/high rep schemes for a good pump and endless cardio just to stay healthy. A normal person pushing 75 would probably think that way and act that way. However, that’s not the Vince way.

Vince McMahon in the gym at 75.

The caption on another video from WWE’s corporate trainer provides more detail: “We did leg press & hack squats before doing 20 reps with 5 plates on each side, 10 reps with 6, 5 reps with 7, before trying our 1RM: Total 22, 45 lb plates.” pic.twitter.com/hj06VMFngZ

What you see above is the machine doing what machines do. Vince on a belt squat doing, what appears to be, 11 plates per side which would total to about 990 lbs.  I know men who are a fraction of his age and couldn’t come even close to doing that. What’s even more insane is the caption of the video;

Vince McMahon in the gym at 75. The caption on another video from WWE’s corporate trainer provides more detail: “We did leg press & hack squats before doing 20 reps with 5 plates on each side, 10 reps with 6, 5 reps with 7, before trying our 1RM: Total 22, 45 lb plates.”

This man has ZERO chill! Many WWE Superstars have come forward over the years and claim that Vince’s workout dedication, work ethic, and grit rival that of superhumans.  Last year, WWE had a big PPV event which required a spot where one of their superstars falls of a tower of unspecified height.

Vince, the larger-than-life monstrosity that he is, demonstrated the spot on his own by falling of a large tower(to a safety net or a landing mat), then brushing off the fall and continuing with his day as nothing happened. I think it’s safe to say that until Vince takes his final breath he will be out working and out training everyone around him.