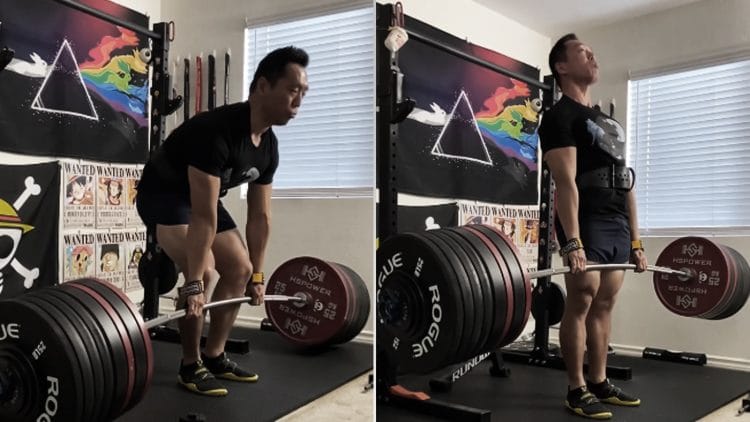 Powerlifter Yangsu Ren recently cranked out a 362.8kg (800lbs) raw deadlift with a conventional stance in the gym. Ren competes in the 83kg (183lbs) weight class. This deadlift record falls short of the IPF raw deadlift record of 382.4kg (843.2lbs) in the weight class by a wide margin. However, it is still a massive feat to achieve. Ren proudly boasts the nickname ‘Deadlift Panda’ and his recent deadlift adds another unofficial record to his name.

The video of Yangsu Ren’s 362.8kg (800lbs) deadlift was uploaded on his personal Instagram account. He executed the monumental lift using wrist wraps, lifting belt, and shoes. There was no lifter’s grind visible as Ren lifted the plate-loaded barbell off the ground in a slow and steady fashion and returned it to the ground after a successful lockout without losing control for a second. Courtesy of Yangsu Ren’s Instagram account, you can watch the full video of the 362.5kg (800lbs) deadlift here:

“Smooth 800lb conventional deadlift today with the neighbor friendly eccentrics 🐼🤟but the true MVP are those half way hanging Rogue Oso collars that held on to dear life 😆
Yangsu Ren wrote in the caption to his post.

Yangsu Ren did not reveal his body weight at the time of the lift. However, he last competed in the 83kg weight class. This makes the lift a whopping 4.37 times his competition body weight and an amazing feat to achieve. While the current IPF raw deadlift world record of 382.4kg (843.2lbs) in the 83kg (183lbs) weight class belongs to Blake Lehew, the IPF world record of second heaviest raw deadlift of 362.4kg (799.1lbs) belongs to John Haack. That makes Yansu Ren’s 362.8kg (800lbs) deadlift the second heaviest in the weight class. However, since he did not execute the deadlift in a competition, it will not be considered as an official world record.

Yangsu Ren last competed at the USAPL Raw Nationals and finished 7th overall in the 83kg (183lbs) weight class. He then took time off to recover from lumbar-induced sciatica. Looking at his progress in the gym, it is certain that the Deadlift Panda will return to competition as a force to reckon with.