The 2008 Mr. Olympia champion turned heads with his recent chest and arm workout routine at the gym. 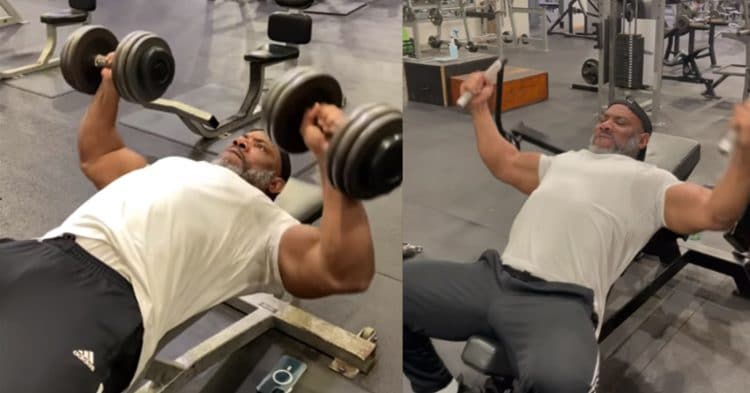 Jackson has managed to stay relevant in the sport for a long period of time. During his time in competition, Jackson’s activity was consequential to his success. The bodybuilder has collected a total of 29 titles in the sport, which is a feat very few athletes have even come close to realizing. One of his most important accomplishments of course came when he won the 2008 Mr. Olympia competition against fellow bodybuilding icon, Jay Cutler.

In addition to cementing his legacy as a Mr. Olympia champion, Dexter Jackson holds the distinction of having won the Arnold Classic a total of five times (2005, 2006, 2008, 2013, 2015). While the IFBB pro bodybuilder has retired from the sport, he still carves out time to build his physique.

Despite downsizing as of late, it’s a welcoming vision to see a storied competitor like Jackson taking time in retirement to rejuvenate his body after years of competition.

Prior to announcing his last show at Olympia in 2020, Jackson was still performing incredibly well on stage. “The Blade” secured second place at the 2020 Arnold Classic in the Men’s Open division. Training in Jacksonville FL., Dexter Jackson recently shared a chest workout (dumbbell press & lying chest fly) to his Instagram page.

In order to maintain the physique of a professional bodybuilder, a massive amount of food needs to be consumed to keep up with the demanding fitness schedule. Jackson no longer needs to bulk up for bodybuilding competitions but still takes his health seriously following his career in the sport. In fact, one of Jackson’s secrets to staying healthy in retirement is hormone replacement therapy (HRT).

As men age, especially following thirty years of age, testosterone levels begin to drop. Fortunately, treatment can offer significant improvements to problems associated with low testosterone like reduced muscle mass and growth. Following the implementation of HRT, the legendary bodybuilder attests that it improved his overall health and alertness.

However, Dexter Jackson recommends consulting with physicians and conducting your own research before pursuing HRT as a treatment option. Given that Jackson is over the age of fifty and still a vibrant force in training sessions, it appears the bodybuilding legend’s longevity and muscled build are here to stay even in his twilight years.

Following his chest workout on social media, Dexter Jackson shows why he’s remained a competitive bodybuilder for such a long time. When “The Blade” enters a training session, it’s all business. Despite hanging up the wrist wraps and enjoying retirement, Jackson’s work ethic is still a key ingredient to his long-standing success.