Blake Lehew scored the total world record in deadlift and total in the 82.5-kilogram weight class. 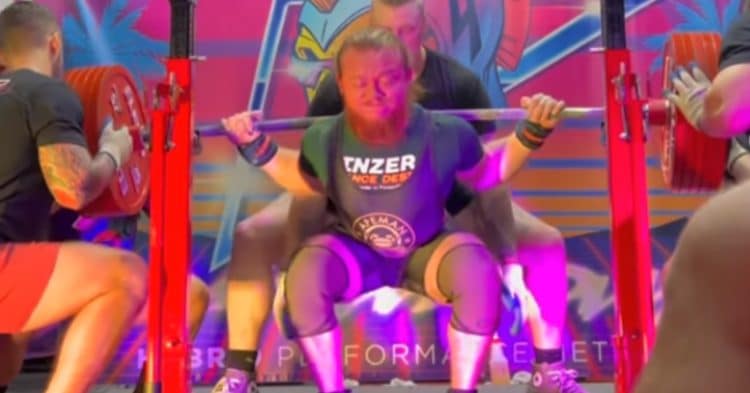 Powerlifting can be one of the most dangerous yet rewarding disciplines in the world. Despite having low expectations, powerlifting phenom Blake Lehew took home two new all-time raw world record totals in the 82.5-kilogram weight class.

The United States Powerlifting Association (USPA) Hybrid Showdown 4 event went down in Miami, Florida. The show featured a pool of intense competitors that competed among various weight classes. In accordance with the shows’ Dynamic Objective Team Scoring System (DOTS), athletes are scored based on a cumulative total depending on their weight and subsequent performances.

While it hardly shocked anyone that John Haack took the title for the men’s 90kg division, many were taken back by the determination and willpower displayed by Blake Lehew. Heading into the deadlift portion of the competition, Blake Lehew’s performances were six for six. While Lehew missed on his first attempt at the deadlift, the powerlifter made up for it and set a record just moments later.

After Lehew missed his first deadlift of 345 kilograms (760.6 pounds), the powerlifter regathered himself and successfully hit the 760.6-pound weight on the second attempt. Then Lehew locked out 382.5-kilogram (843.3-pound) on a third attempt to secure the all-time deadlift (full meet) and total world records at 82.5 kilograms. Prior to this lift, Lehew tied these numbers at the 2021 Kern US Open with a raw with wraps world record.

As it stands, the current all-time world record for the 82.5-kilogram class is 405 kilograms (892.9 pounds) which is held by Dmitry Nasonov. Below are some of Blake Lehew’s all-time record lifts from his latest meet at the USPA Hybrid Showdown 4.

Despite going into the meet without world record expectations, Blake Lehew did exceedingly well. The powerlifter admitted that he’s been struggling with a nagging knee injury. While the intermittent pain has hindered his squatting ability, that didn’t stop the powerlifter from showing out at his last meet.

Given the steady improvements Blake Lehew is making in his powerlifting career, he is certainly one to watch in the coming months. The 82.5-kilogram weight class is thriving and with more records being set, the bar continues to rise.

Lehew’s recent deadlift world record is 44.1 pounds greater than the last world record. Overall, that equates to Blake Lehew lifting 4.65 times his bodyweight. After taking home two new all-time raw world record totals in the 82.5-kilogram weight class, the powerlifting future for Lehew is as bright as ever.