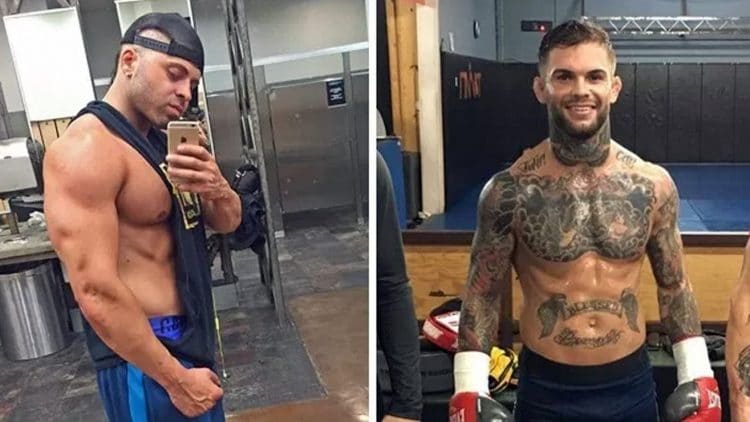 Cody Garbrandt’s feud with that meathead is the weirdest MMA beef since Dana White agreed to box Tito Ortiz.

Cody Garbrandt was scheduled to defend his title against TJ Dillashaw at UFC 213, but injury saw that scrap postponed.

The beef began when Cody Garbrandt was forced to pull out of his title fight against TJ Dillashaw at UFC 213 due to a back injury. Dillashaw began looking for a flyweight title shot against Demetrious Johnson but that never came to fruition.

Garbrandt sent out a tweet telling TJ to wait for his back to heal so that the fierce rivals could throw down as originally planned. That’s when Kader piped up, called Garbrandt out, and the feud was born.

The pair traded insults back-and-forth on social media and in the end, Cody tweeted the address of his gym and challenged Kader to a fight.

Amazingly, Kader took up the challenge sent a screenshot of a plane ticket he bought to Sacramento on June 26th. He also claimed that he’d bring a camera crew to film the fight.

Feeling his first whiff of fame, Kader began to relentlessly promote the fight on his Instagram account: he uploaded photoshopped posters, promos and did everything he could to hype up the showdown.

The date finally arrived but when Garbrandt showed up at Uriah Faber’s Ultimate Fitness, as agreed, Kader was nowhere to be seen. After waiting around for a couple of hours, the champ left his phone number at the gym’s reception in case his would-be adversary actually fronted up.

The chances of this fight actually going ahead took a dive when Kader tweeted the champ, insisting that Cody DM’d his phone number.

Garbrandt’s responses suggested that Kader did indeed show up but then decided to gap it instead of throw down with the heavy hitter.

Now, you’d think that would be the end of it: both sides would claim that they were at the gym and the other didn’t show. But luckily for us, Kader decided to actually release the footage of his arrival at the gym.

During his tough-guy posturing in reception, one of Garbrandt’s Team Alpha Male teammates came out to greet Kader and took delight of chirping the ex-bodybuilder, so much so that Kader decided to leave the premises.

Check out the hilarious footage of the exchange on the player below. The comments that roll through in real time are the best!

In hindsight, perhaps ducking out of the fight was the smart move by Kader: he was clearly going to get his ass kicked in much the same way that a social media troll did by UFC veteran Josh Neer after he kept pestering him abusive messages.