Justine Kish’s Reaction to Octagon Incident: “That’s My Sh*t on The Floor” 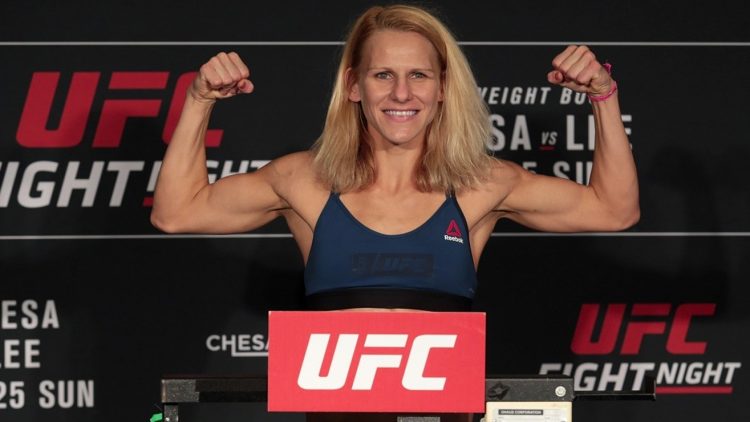 Justine Kish is taking her accident at UFC Fight Night 112 in stride.

Kish took on Felice Herrig in Oklahoma City in a strawweight clash. She lost the fight by unanimous decision. Kish showed toughness, getting out of dangerous positions but her heart wasn’t the story of the fight. It was her bowels.

The Domenick Nati Show recently had Kish on as a guest. The 115-pounder explained what was going through her mind when she realized what transpired:

“It’s only changed as far as a flood of people I’m interacting with now. I was humiliated, I was like, ‘how do I reach out to my fans.’ The bell went off and I noticed something. I was like, ‘what is that smell? I’m thinking it’s the referee. Did he pass gas or something?’ And I look on the floor and I see myself and I’m like, ‘oh no, oh my god that’s me.’ And then I’m thinking, ‘okay do I clean it up? What do I do?’ And I look at my corner and I’m like, ‘that’s my sh*t on the floor.'”

She got a Sponsorship offer from Dude Wipes:

Naturally, Kish has been in talks with sponsors who see this as an opportunity to cash in. She’s more than willing to poke fun at herself.

“There’s this one company called ‘DUDE Wipes’ and they’re a cleansing company and we’re still in negotiations on what’s gonna happen. If we’re gonna do a commercial or what’s actually being fabricated or being put together as far as what kind of ideas (they have). So my agency is talking to them, we’re bringing up the production value and things like that.”

UFC President Dana White was well aware of the accident and called Kish to see how she was holding up.

“He called me the day after the fight. He checked in on me, made sure I was okay because he realized there’s a little bit of humiliation behind what happened. I was in a dark area for a few hours. He gave me some encouragement. He said, ‘you fought like hell out there, loved how you owned up to it.'”

Kish said that White even gave her the idea that she might be receiving a “locker room” bonus in the coming weeks for dealing with the incident so well.

“The other thing that’s nice is that Dana hinted is that I have a discretionary bonus, a gift, for my performance,” she said. “The UFC’s very good at giving little secret bonuses — at least to me — here and there. I didn’t ask and I didn’t pry how much it’s going to be or anything, so we’ll see. I’ll find out in a few weeks.”