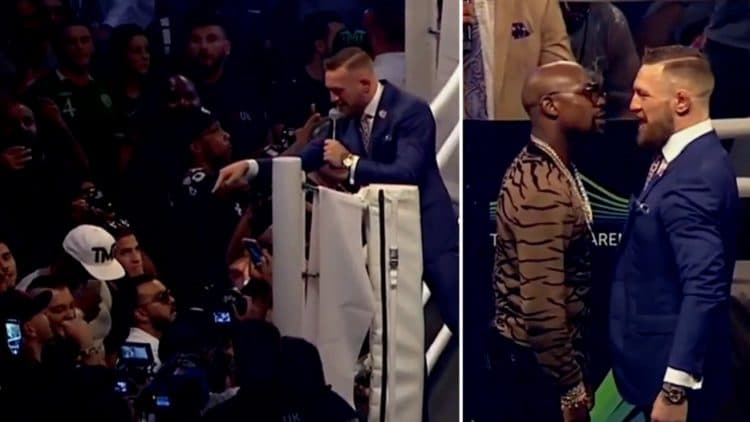 The last leg of the world tour saw Conor McGregor arrive & Floyd Mayweather in London, Wembley Arena, the UFC champion returned from a dismal showing in Brooklyn by delivering another cutting speech.

As well as Mayweather and Espinoza, the 40-year-old’s ‘juice head’ body guards were also subject to a verbal assault.

During the presser in Brooklyn, NY, Mayweather summoned his bodyguards to McGregor’s team and a scuffle ensued between the two sets of the entourage.

Cooler heads ultimately prevailed, but afterward, Conor was not pleased by the encounter.

“Juicehead fools,” McGregor said at the post-event press conference. “I don’t know, man. I didn’t even see them until they were on top of me. I was like, ‘what?’ and then everybody was pushing and shoving. But, handbags, we call that back where I come from. It means it’s nothing, it’s just handbags. It’s just a term we use.”

“We’re having a good time, but I’ll tell you what, if those f*cking juiceheads [do that again], I’ll slap the hell out of all of them,” McGregor said. “If something like that happens at the next one, something will have to happen.”

Whilst McGregor’s entourage was mostly kept off stage for the entire London press conference, didn’t mean Conor was going to let things slide.

McGregor going after the bodyguards, calling them juicehead turkeys. “You’ll do fuck all, juicehead monkey!”

Mayweather tells Espinoza to “point to the easy work.” He won’t point to McGregor. Conor laughs.

Conor McGregor's beef with Showtime exec. Stephen Espinoza is the best part of the #MayMacWorldTour