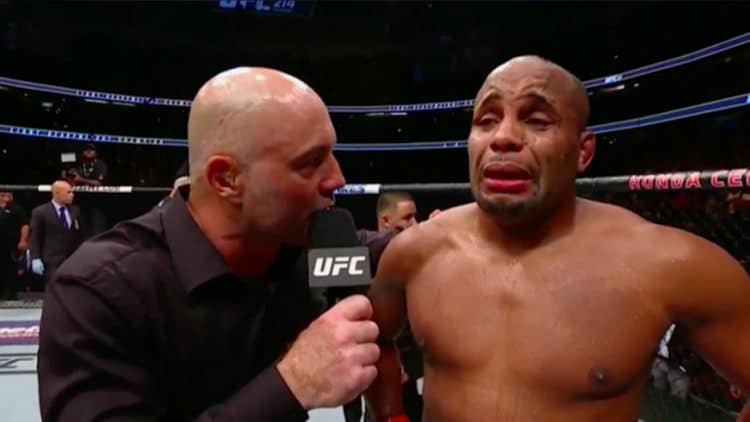 Jon Jones claimed a win of gargantuan proportions last night at UFC 214, as he reaffirmed his status at the top of the promotion’s light-heavyweight division.

Joe Rogan has apologized to Daniel Cormier on social media after the interview he conducted with the former light heavyweight champion following his brutal knock out loss to Jon Jones at UFC 214. Interviewing the losing fighter, who can often be concussed, goes against the norm, and Rogan came in for much criticism on social media.

Rogan had stated after a controversial interview with Alistair Overeem in the past that he would no longer interview fighters who had been KO’d, but he wanted to give Cormier a chance to speak after such an important fight, a decision that did not go down too well with some of those watching at home.

Cormier was visibly upset in the octagon after the fight and when Rogan asked Cormier on his thoughts about what had happened, DC struggled to hold back the tears for his response:

I thought the fight was going well, I don’t even know what happened, I got kicked in the head. Oh man, it is so disappointing.

Watch the interview in full below:

“My apologies to DC and to everyone else upset at me for interviewing him after the fight. In all honesty, I was kind of in shock and I don’t think I realized what I was doing until I had a mic in my hand and I was talking to him.

“I’ve said that I don’t want to interview fighters after they’ve been KO’d and then I did it to someone that I care a great deal about. It was 100% my f**k up and no one pressured me to do it.

“I was beating myself up about it all night, and whenever something like that happens it’s always my sincere intention to apologize and express my honest feelings.

It’s a genuine apology and he has taken full responsibility for himself, but there really should be an official protocol put in place regarding fighters who are clearly concussed being required to address the audience, as there really is no need for it.

Surely there will be no hard feelings, and as Cormier will be a future full-time UFC analyst in the future, we’ll likely see the two work an event together soon.

Proof: Conor McGregor Is Still Not Ready For Boxing