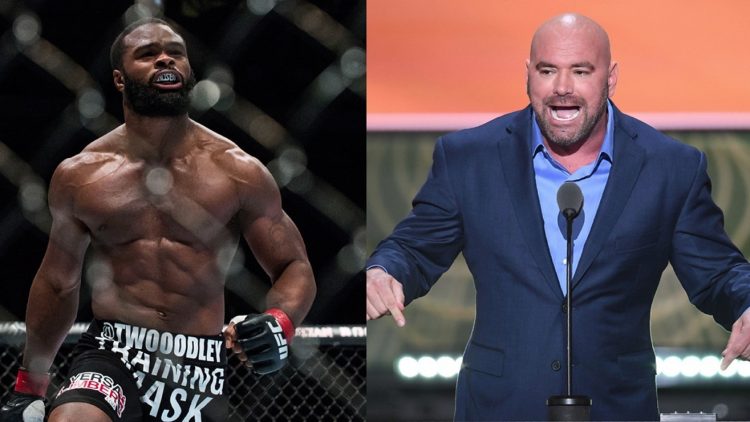 Dana White wasn’t happy with what he saw from Tyron Woodley on Saturday night, and apparently, the feeling is mutual.

Even prior to Dana White and Tyron Woodley’s public spat following UFC 209, the two have always jawed at each other through the media.

According to the audience, even though Woodley won they were not satisfied with his performance as he was booed during his post-fight interview. At the post-fight press, Dana White piled on to that sentiment by saying:

“It’s easy to say a win is a win, but when you get booed out of an arena, that means people don’t want to watch you fight.”

He doubled down by adding,

“Who wants to pay to see Tyron Woodley fight again?”

Woodley replied to White’s comments during an interview on The MMA Hour.

During an appearance on “The MMA Hour” on Monday afternoon, Woodley, who retained the welterweight title via a unanimous decision win over Demian Maia at UFC 214, demanded “a public apology” from his boss for comments made following the fight.

“The word behind the business is ‘man.’ You need to be a man and owe me a public apology. And if I don’t get that, I’m going to start leaking some s— that people don’t want to be out in the wind. I’m not kidding about that.”

Woodley didn’t get the public apology he asked for — at least not yet — it seems the two men have talked recently and aired out their differences.

“Woodley and I talked and he said he was just pissed and upset and didn’t mean it,”

For White, his main issue with Woodley’s performance was that he felt his champion could’ve ended the fight whenever he wanted to. For his part, Woodley says the reason he was unable to pop his punches like he wanted was because he separated his shoulder in the first round.

TMZ also reached out to the current 170-pound champion to confirm all was well, and he kept it short, sweet and to the point. “We good,” said Woodley. “The Chosen One” still is not getting that Georges St-Pierre fight, though.

Nevertheless, it seems all is well between White and Woodley!