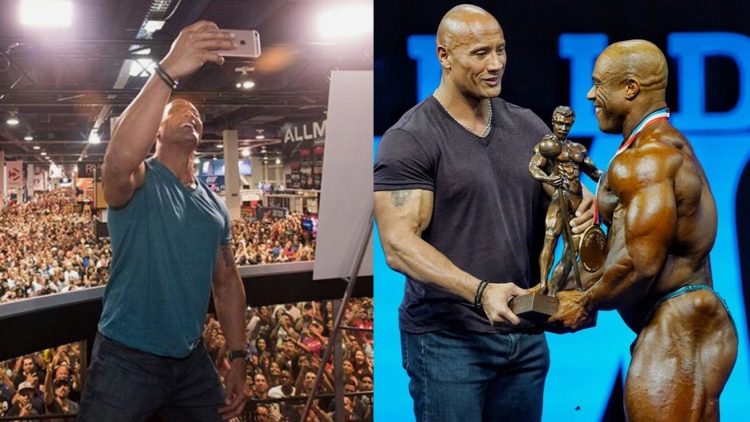 Dwayne Johnson took the 2016 Olympia by storm, and it looks like this year will be no different.

Seven Bucks Productions is out to shed as much light on the sport of bodybuilding as possible.

The Rock posted a video of 2016 Mr. Olympia Phil Heath with his nearly 100 million followers on Instagram and Facebook showcasing his trophy, alongside a very promising caption.

In the post, he shared that his production company, Seven Bucks Digital Studios, will be “taking over” the Olympia to showcase the sport of bodybuilding and its inspiring competitors.

Last year I stood on the Mr. Olympia LLC stage and announced that Dany Garcia, myself and the rest of our Seven Bucks Productions team would work diligently to shine a light on the Olympia, its amazing competitors and the world it encompasses in a brand new and entertaining way.

At its core, THE OLYMPIA has something for everyone and our #OlympiaTakeover will showcase the many complex, fascinating and inspiring layers our sport offers the world.

We also can’t wait to see what this year has in store for the athletes and celebrities at the Olympia, but the best part of the post was probably Johnson’s final sentiment:

The Rock was honored at 2016 Mr. Olympia when he received the “Man of the Century” ICON Award. During his speech, he announced that his and Dany Garcia’s production company, Seven Bucks Production, would partner with CBS Sports to broadcast the 2017 Mr. Olympia on live TV.

Check out these highlights from his speech, which he posted on his Instagram:

That’s right, after more than three decades, the Mr. Olympia competition and bodybuilding will be finally back on TV in homes across the world.

We’re thrilled to see The Rock is promoting the sport of bodybuilding. We hope this Olympia really helps push bodybuilding into the mainstream. Stay pumped!!!

WATCH: Conor McGregor Call Out Nate Diaz For Trilogy Fight, But Only at 155 Pounds